Across the Tartar Ditch - German AAR

Tim at RangerX3X beat me to the punch with his great AAR of Chris' soon to be released latest Command Ops scenario, Across the Tartar Ditch. In this scenario the German LIV Corps is tasked with making the breakthrough into Crimea. Opposing them are the Soviet 51st Army. The Soviets in particular hold a substantial (and ancient) fortification known as the Tartar Ditch that the Germans will need to penetrate to accomplish the breakthrough. 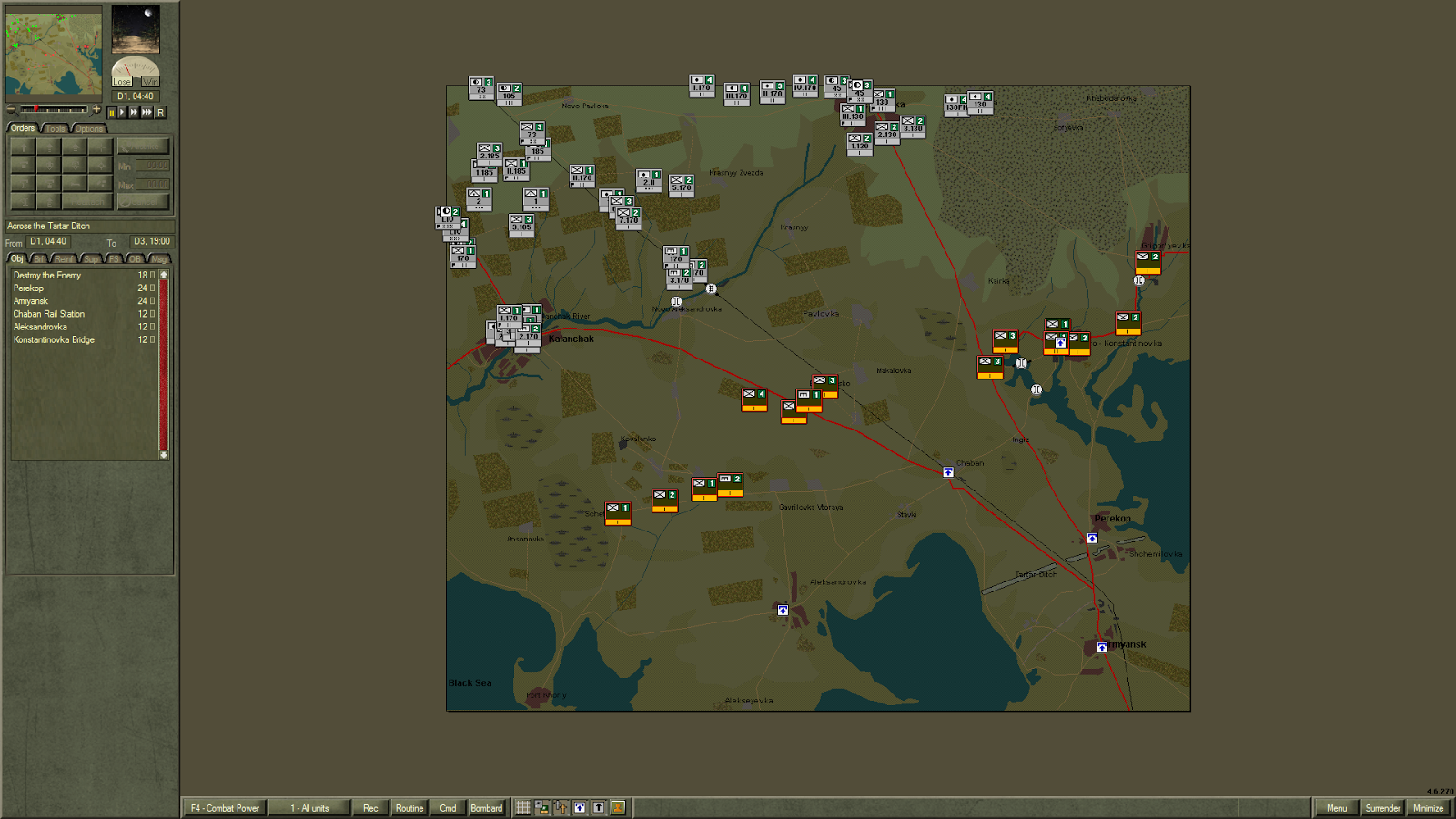 My initial positions and what I know of the forward Soviet defensive line as of D1 0440. Forces available to me at this point are the 73rd (on my right) and 45th Infantry (on my left) Divisions. 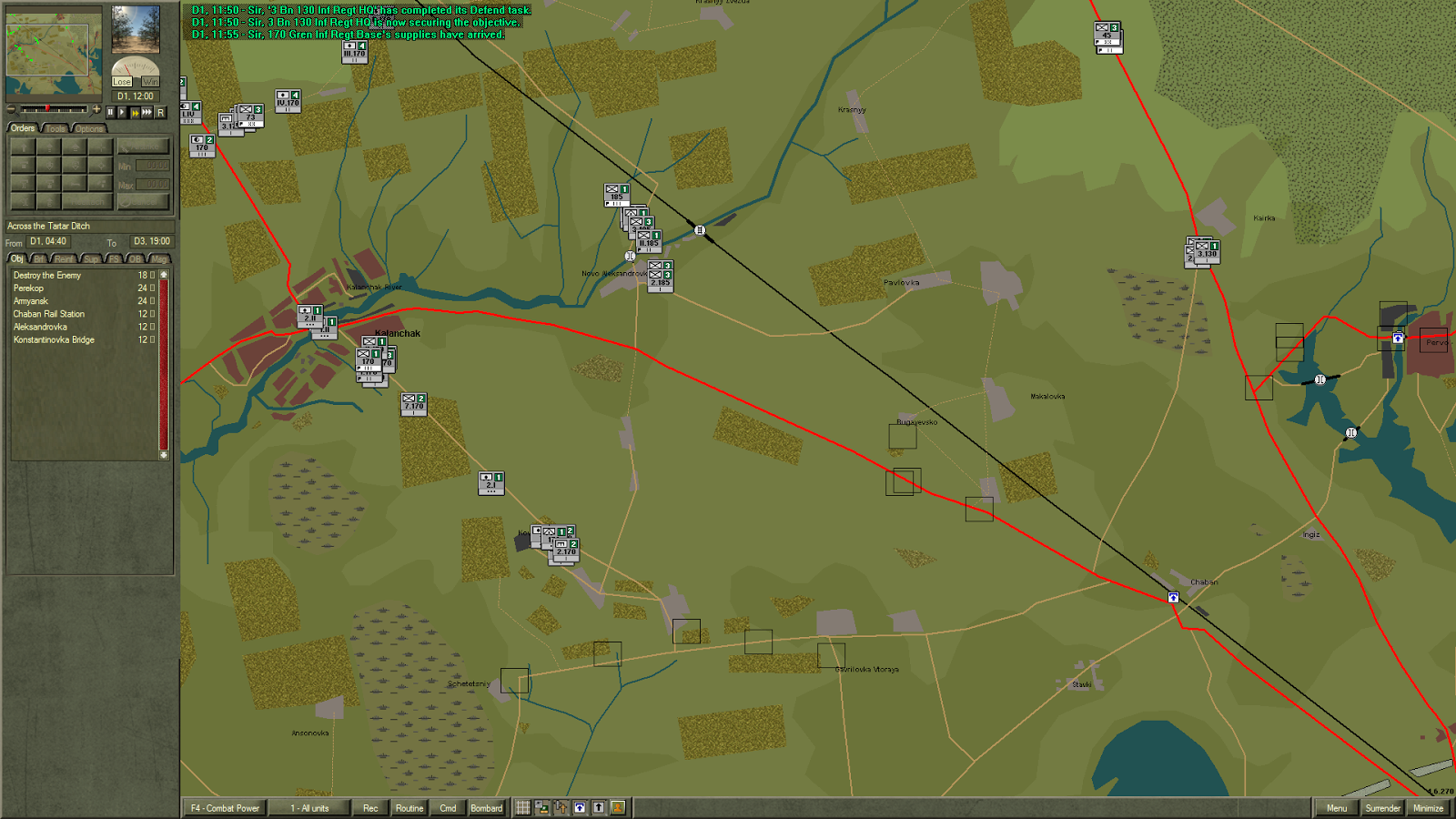 The 73rd Division is made up of the 170th and 185th Infantry Regiments along with supporting divisional troops and artillery. At the beginning of D1, these troops are all but exhausted. My plan is to probe south until I hit resistance or dark and then pull back into defensive positions to rest. We are several kilometers north of the last known enemy positions. It will take most of the day to move far enough south to get a more complete picture of the Soviet forces.

The line units of the 45th Division are fresher, but are very weak. The core of the 45th is the 130th Infantry Regiment. The battalions of this regiment have been reduced to not much more than companies. The 45th doesn't have much in the way of support troops or artillery attached, either. There's not a lot of combat power there, either. Like the troops of the 73rd, I plan on cautiously advancing during D1 to learn more about Soviet dispositions rather then throwing my relatively weak forces into an assault they can't win.

Things will change on D2, when elements of the LSSAH SS Panzer Division arrive. 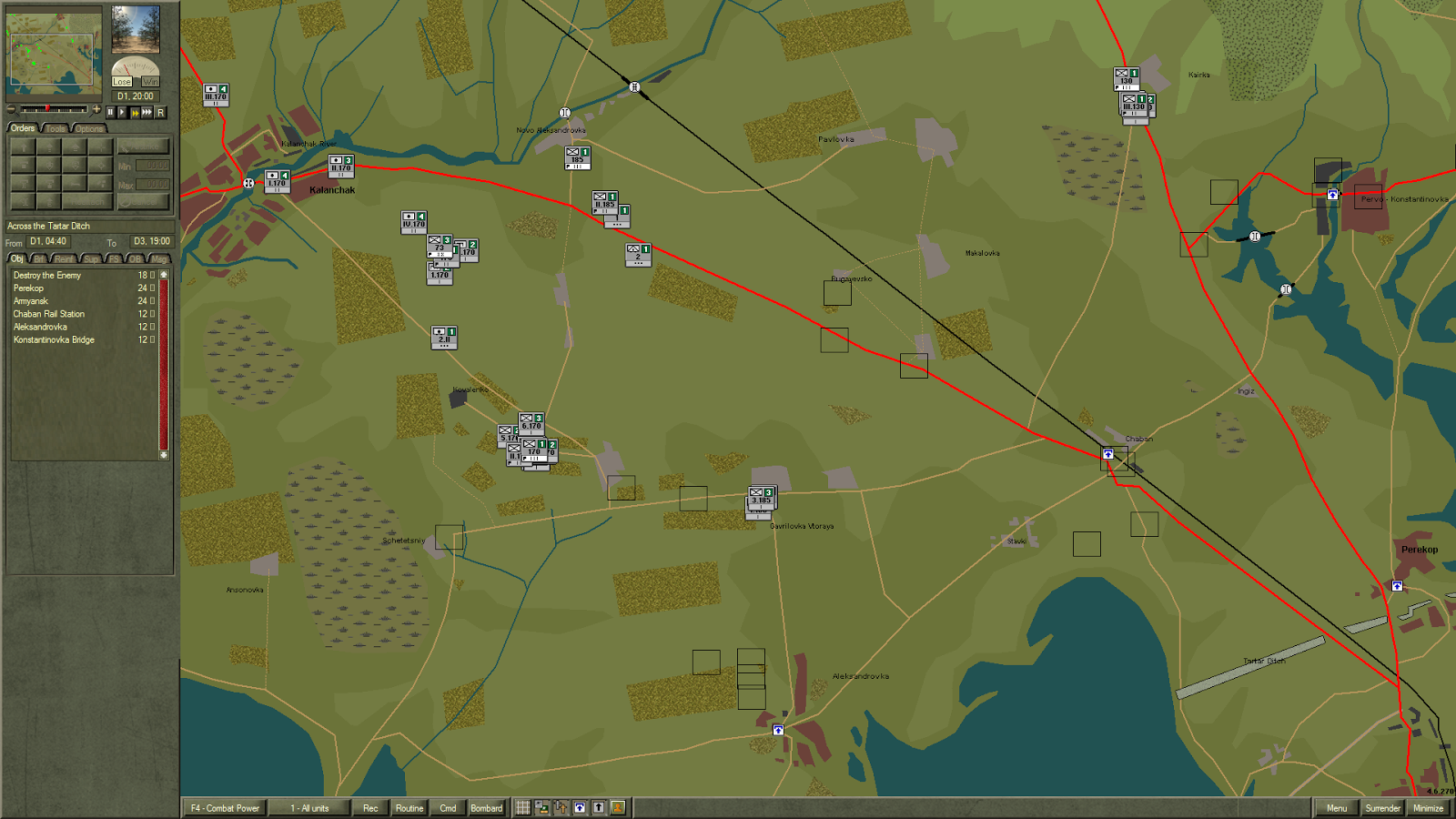 By 2000 my troops have reached points where they can observe the last reported locations of the Soviet line. There aren't any Soviets. It is time to rest the troops to prepare for the main combat tomorrow. 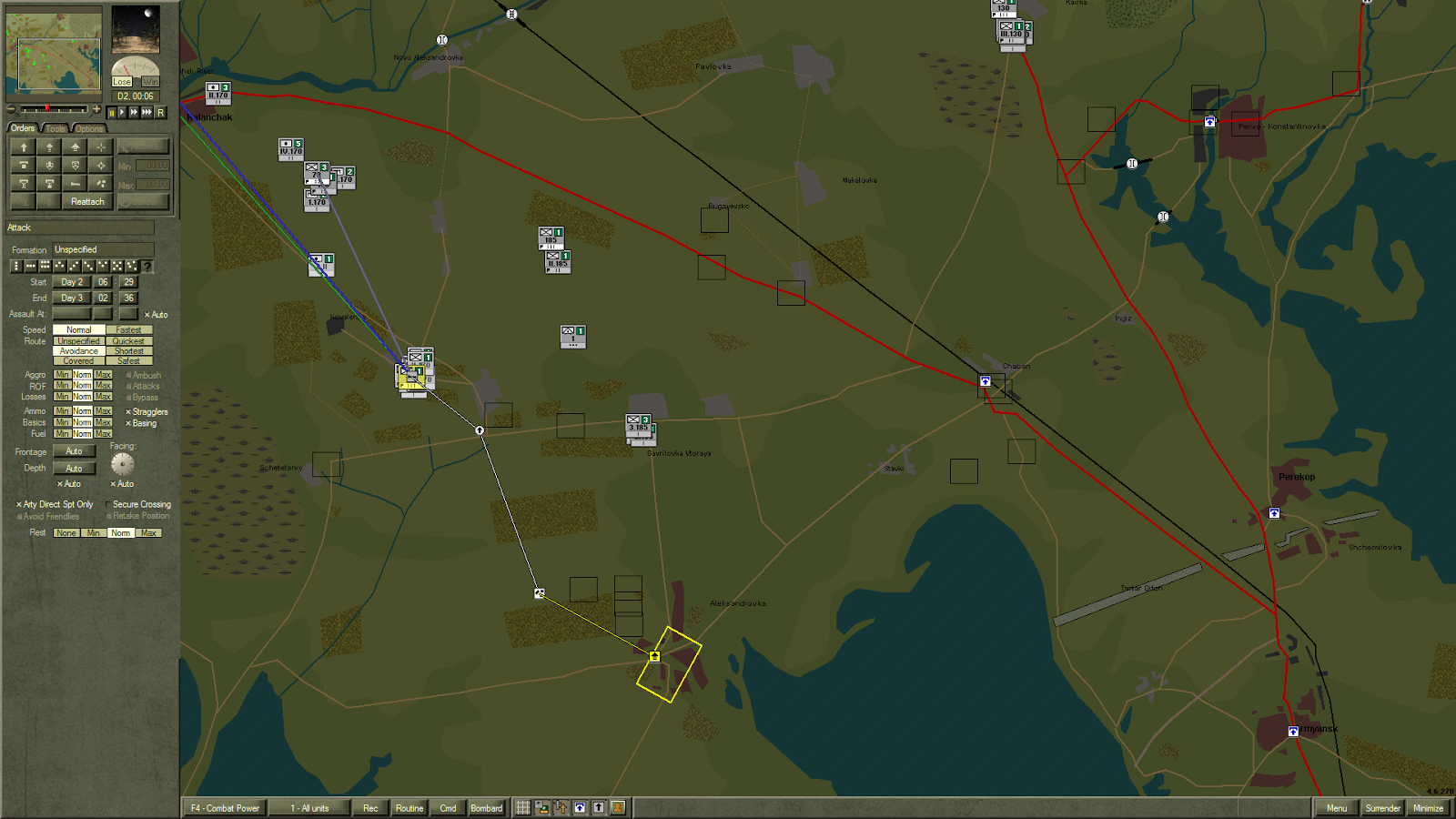 Around midnight, I begin planning for tomorrow's attack by the 73rd. I will use the 73rd to attack and occupy the town of Aleksandrovka, one of the victory locations for the scenario. 170th Regiment will move south and attack the town from the west, while 185th Regiment will move straight south and attack from the north. 73rd Division will provide artillery support for the attack and commit the 170th Pioneer battalion for the final assault on the town.

I'm having 130th Regiment sit tight until elements of LSSAH Panzer begin to arrive. About all 45th Division is good for at this point is occupying an objective capture by units in better shape. 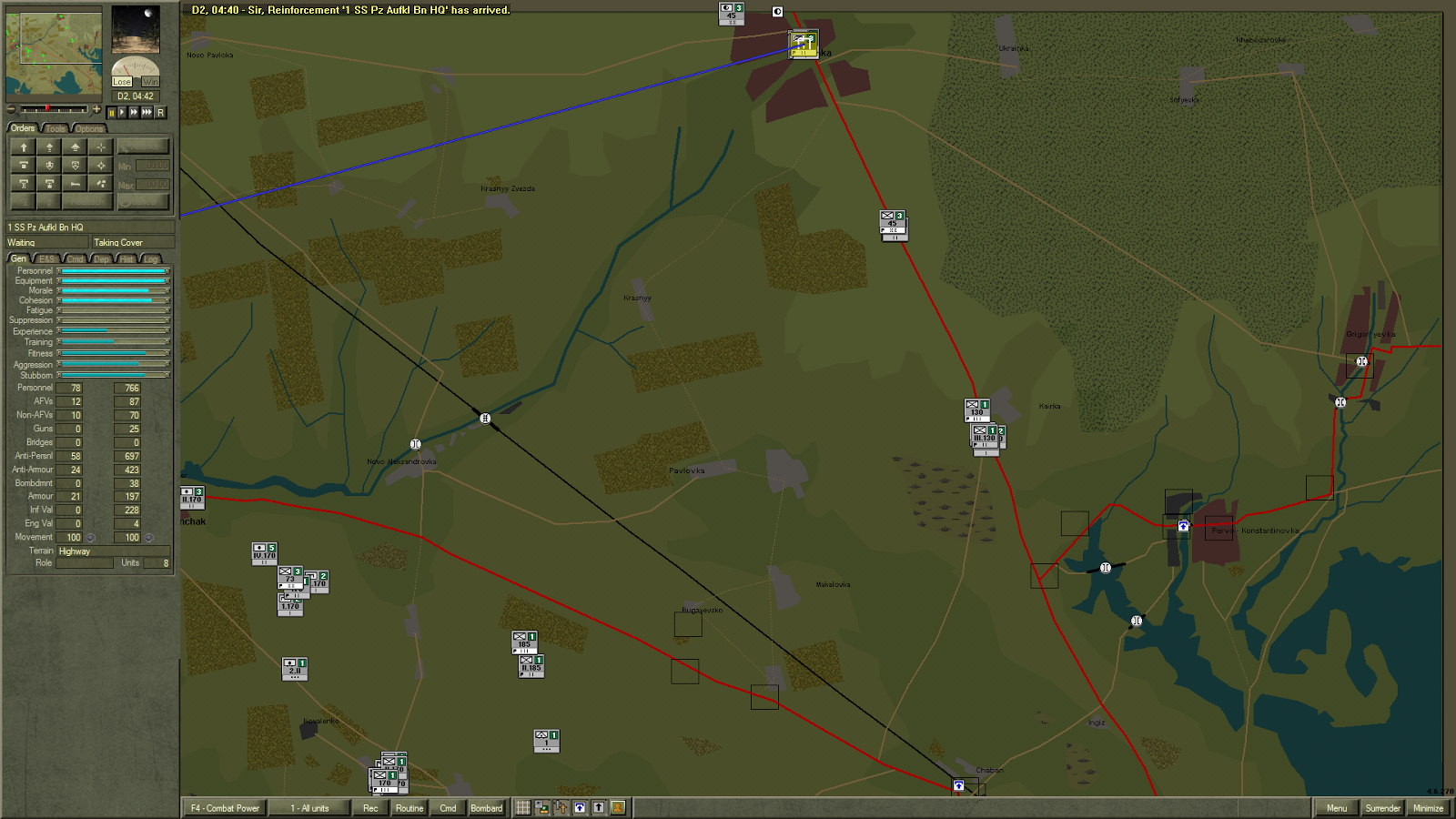 Around 0440 on D2 the reconnaissance element of LSSAH arrives. I task them to move north of the Chaban Rail Station objective and prepare to attack. 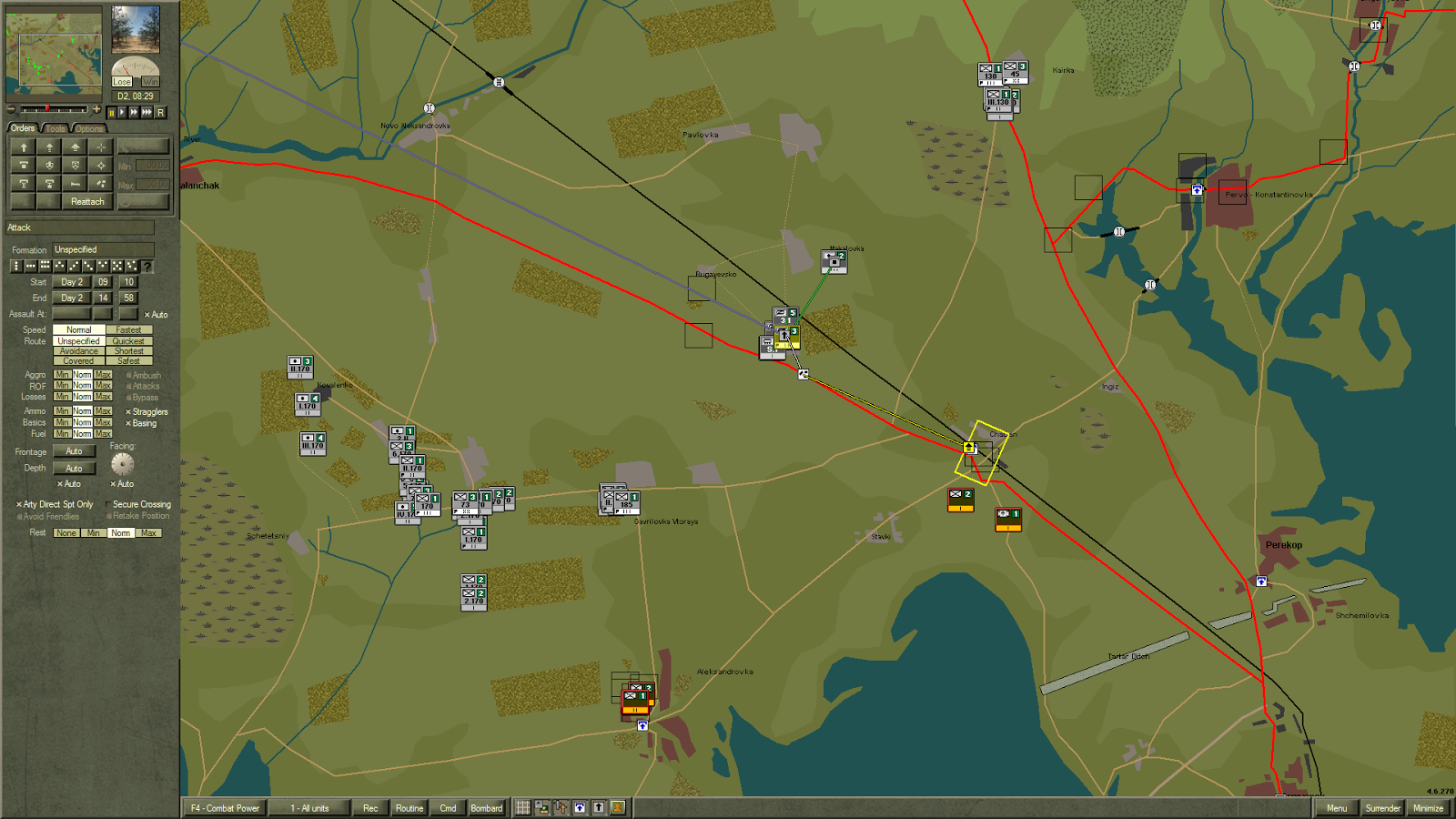 At 0830 73rd Division's attack on Aleksandrovka has kicked off. 1st SS Panzer Aufklarungs Battalion is in position to attack Chaban. The Aleksandrovka attack will secure my right flank. I want to take Chaban to secure a clear route to Perekop and the real prize, Armyansk, beyond it. Chris did a great job picking realistic objectives for this scenario - I'd want forces in these places even if they weren't game objectives. 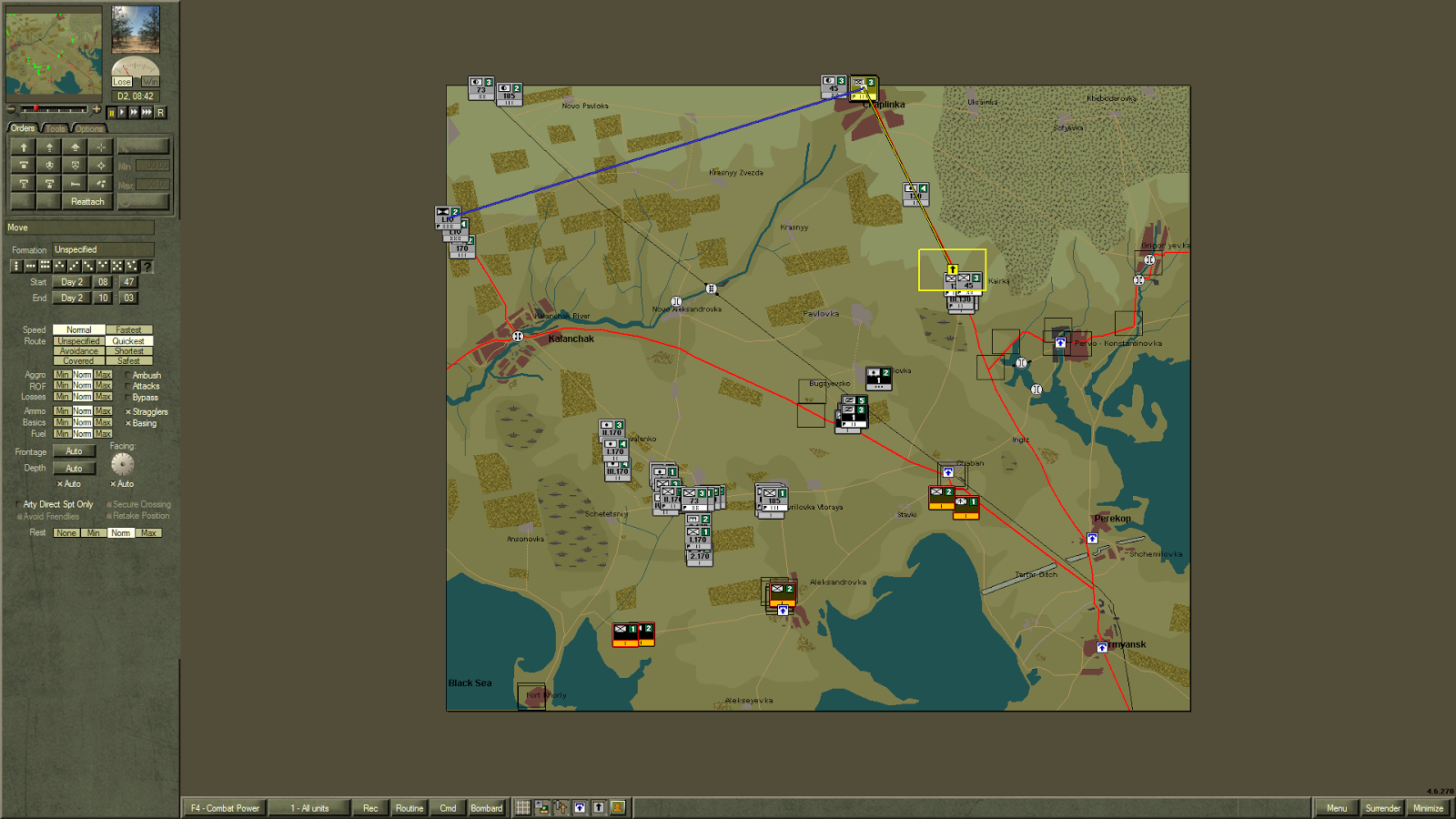 As the attacks on my right and center begin to develop, 2nd SS Panzergrenadier Regiment arrives. 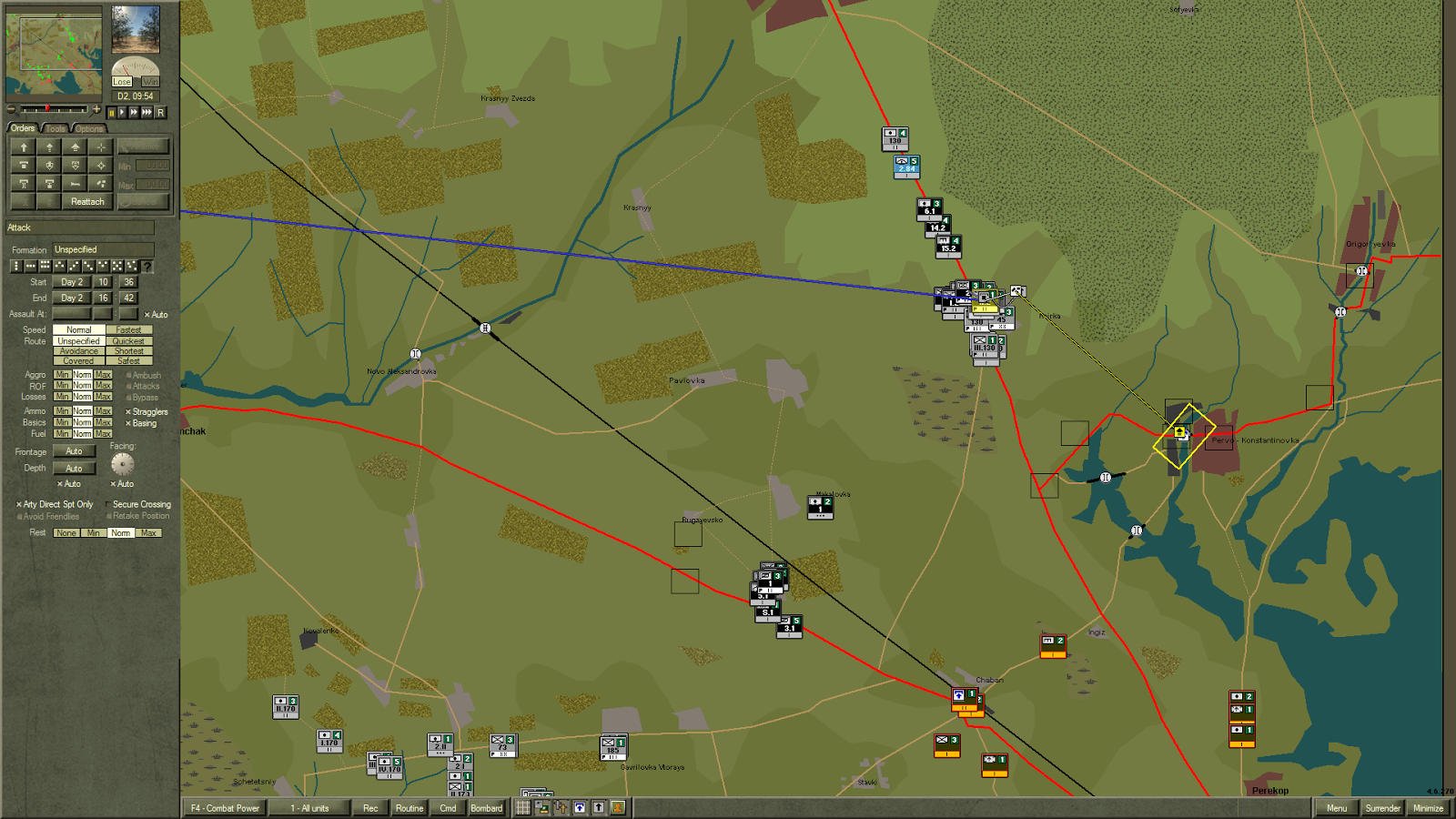 2nd SS Panzergrenadier is a powerful, mobile mechanized infantry formation and the bulk of my striking power. I will send one battalion to secure the Konstantinovka Bridge objective, while the other battalion and regimental troops push south to take Perekop. I'll have some armor coming soon, too. I'll send that south to support the Perekop attack. 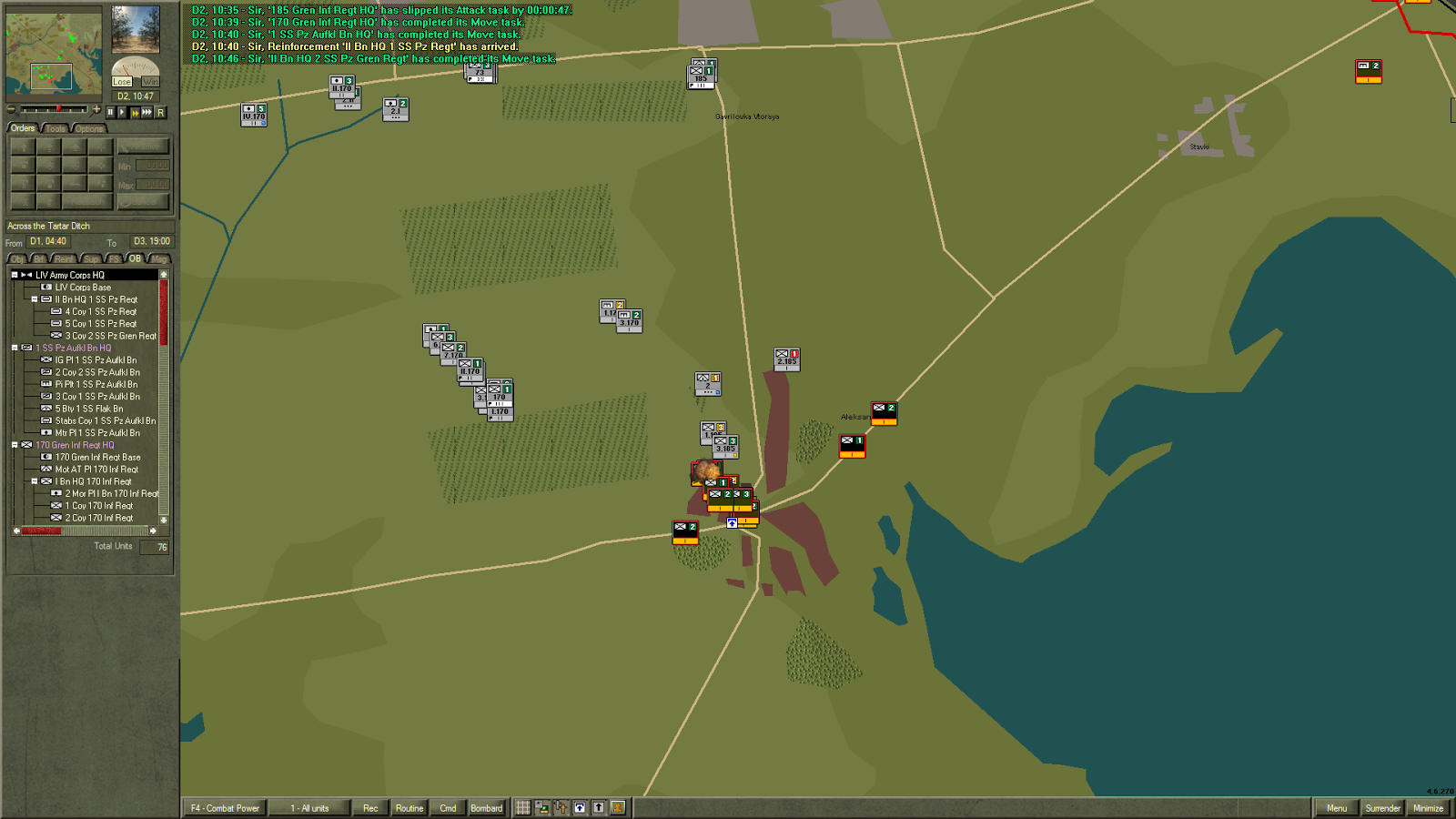 185th Regiment attacks Aleksandrovka. 170th Regiment is lagging behind and will still need to organize for the attack. I could have done a better job synchronizing the assault. The key to victory here will be the overwhelming application of artillery against the Soviet defenders. 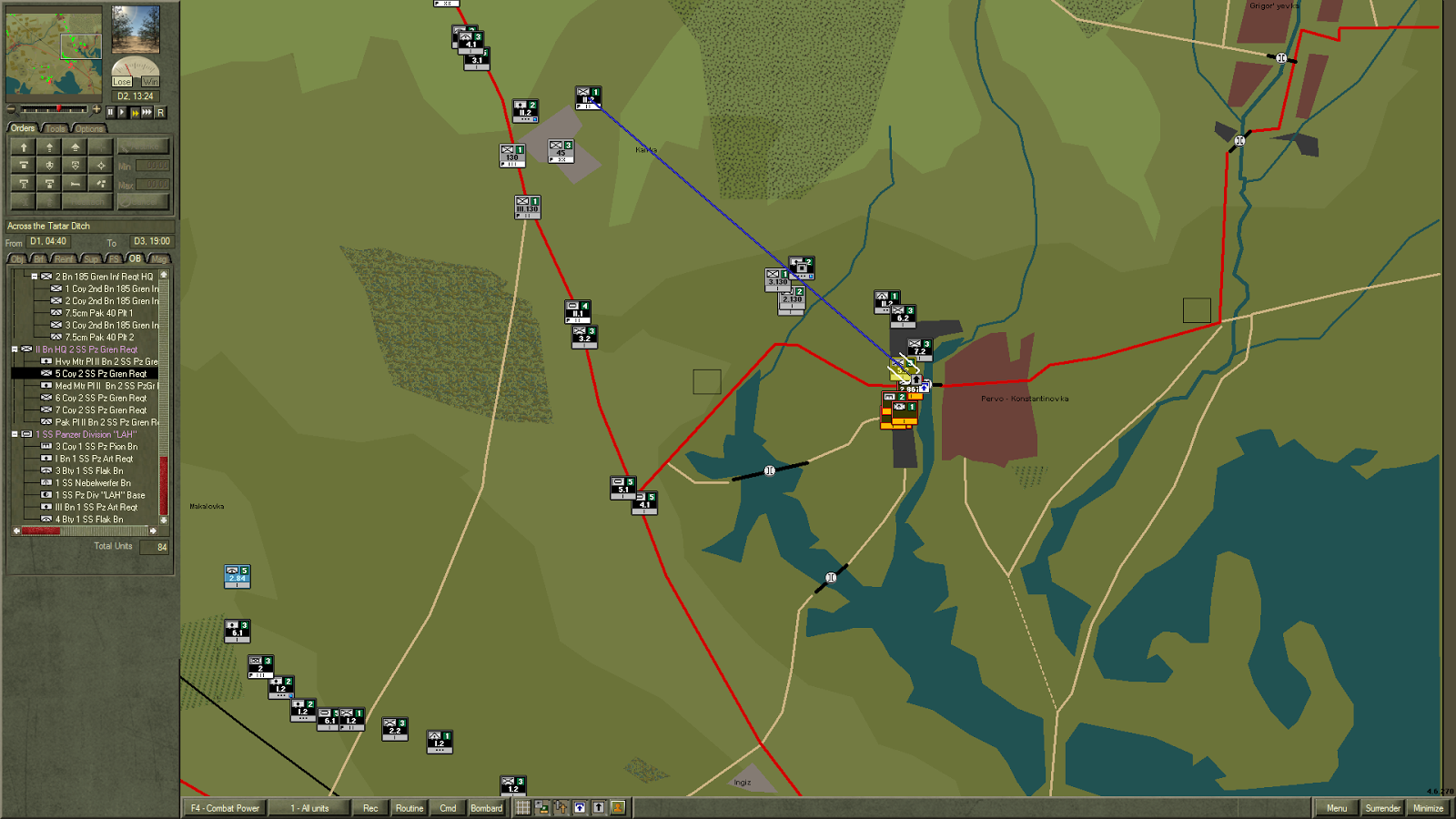 At 1330 the II Battalion of 2nd SS Panzergrenadier Regiment is attacking Konstantinovka Bridge, with the 130th Infantry Regiment in support. The remainder of 2nd SS Panzer is moving to the jump off point for their attack on Perekop. 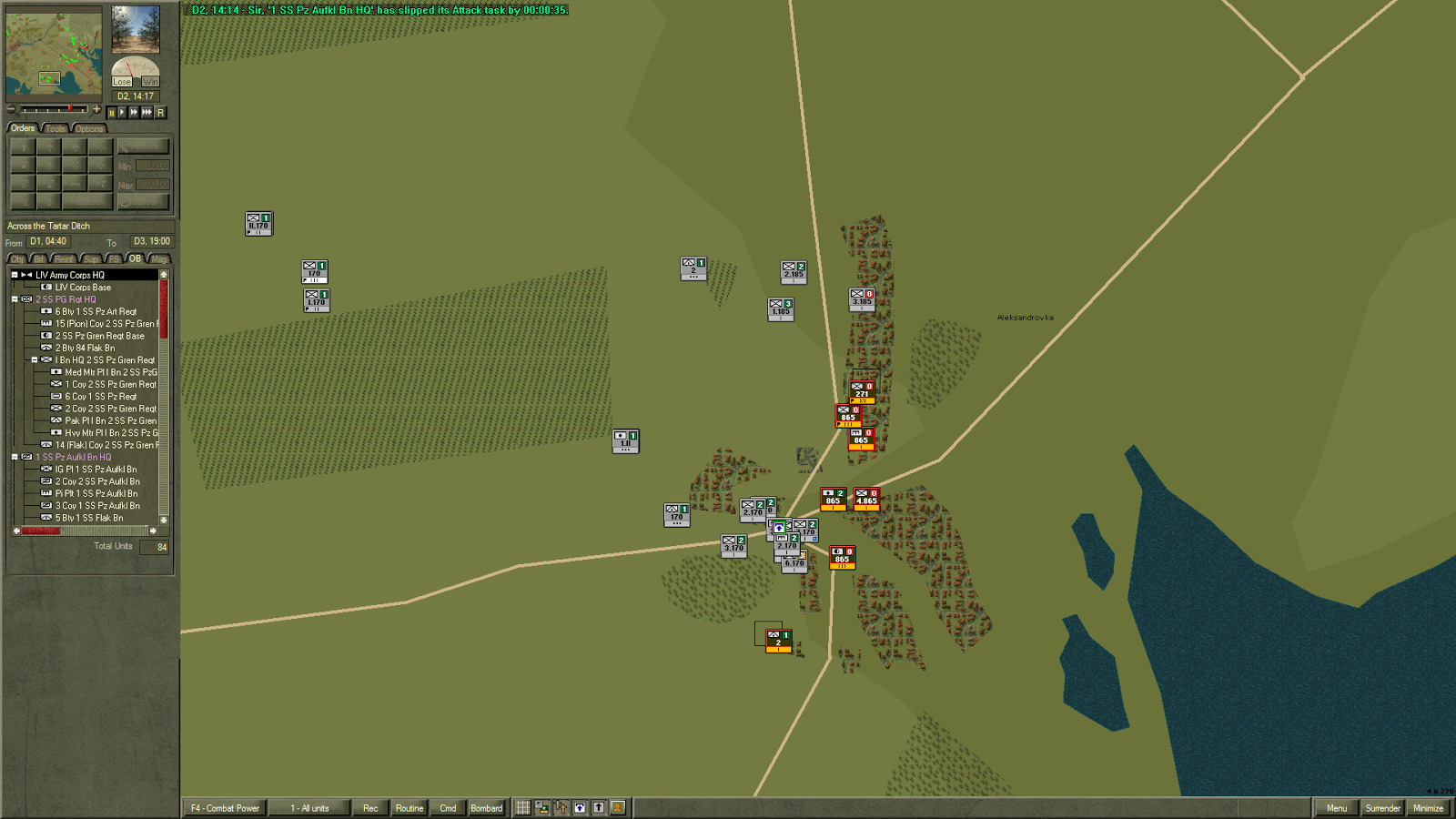 Around 1400 D2 Aleksandrovka falls to the 73rd Division. 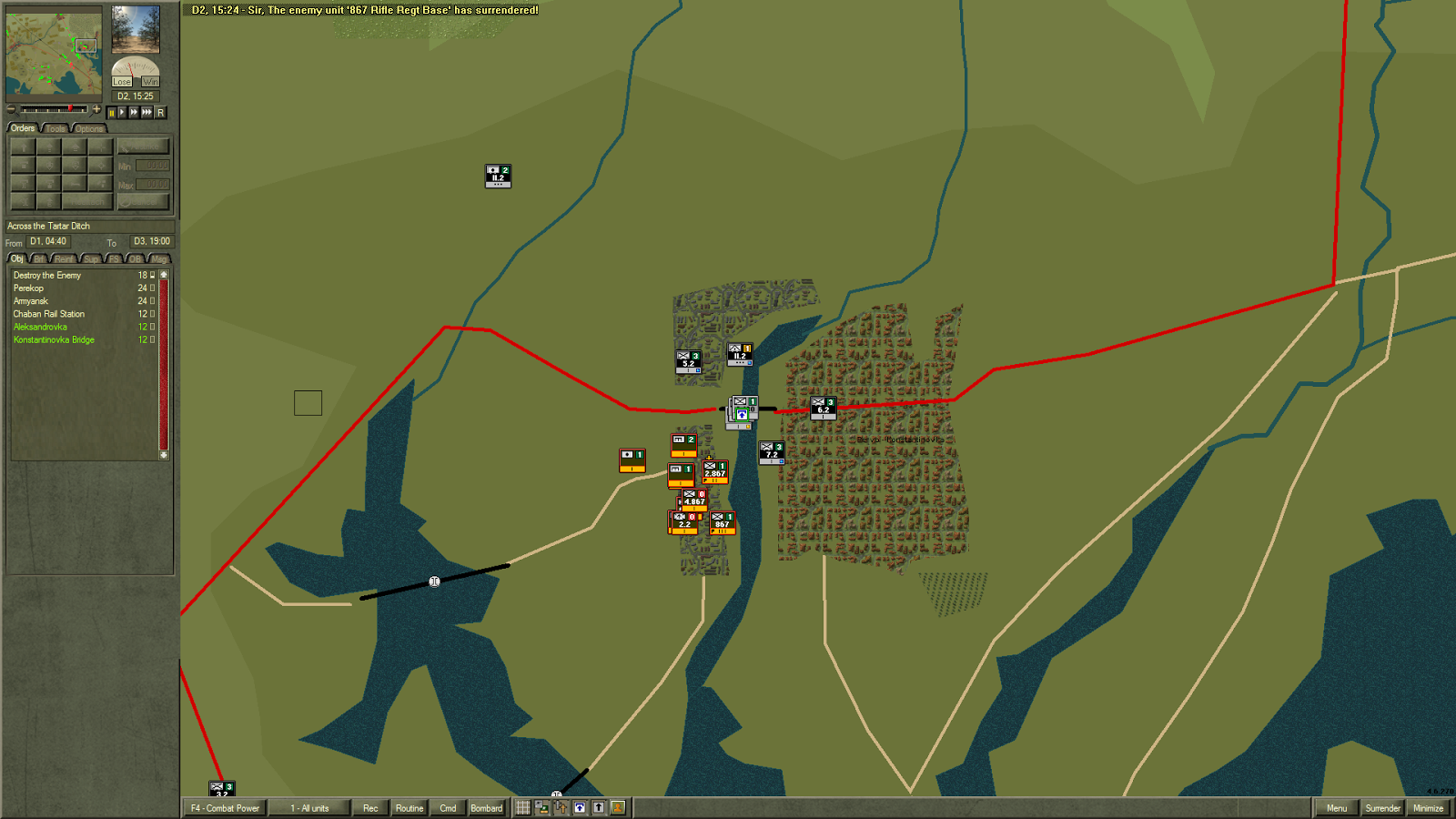 An hour and a half later the Konstantinovka Bridge is captured. Both flanks of the advance are now secured. 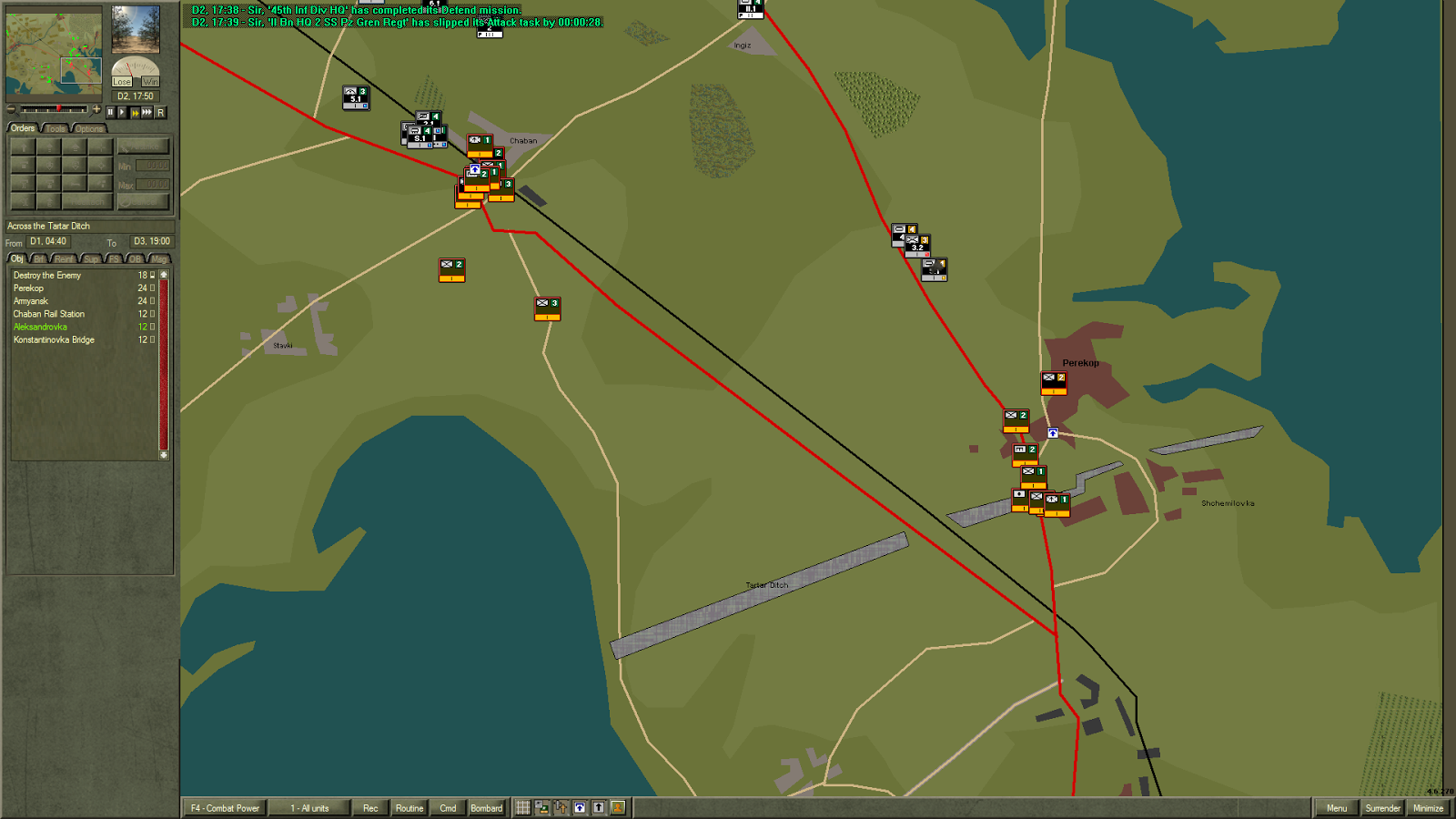 1st SS Panzer Aufklarungs isn't having much luck in the attack. They lack sufficient artillery support to drive the Soviets from the objective.  Also, I failed to sufficiently coordinate the attack of 2nd SS Panzergrenadier with the II/1 SS Panzer Battalion. The armor has raced ahead of the grenadiers and is encountering heavy artillery fire north of Perekop. 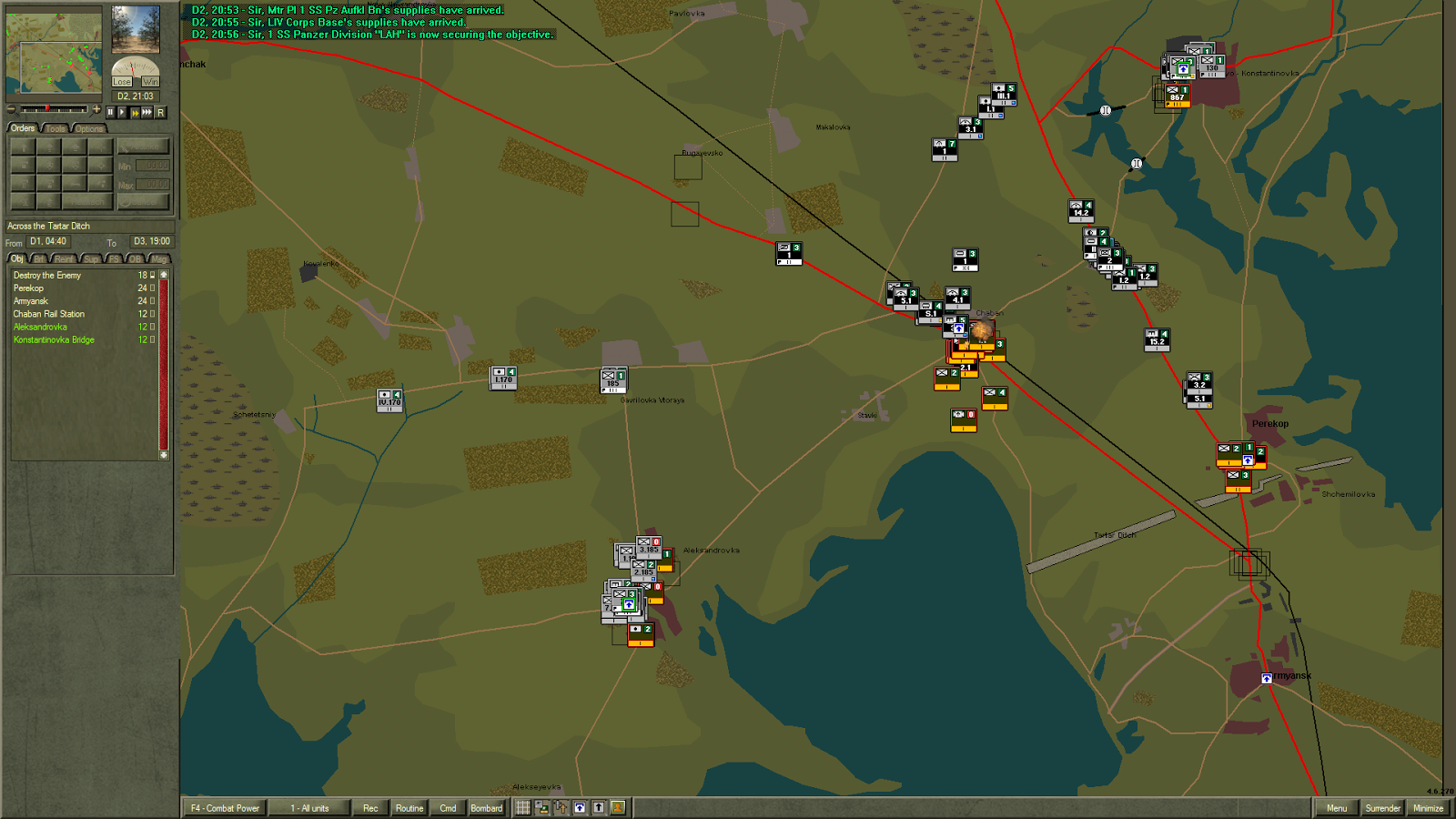 By early evening the divisional troops and artillery of LSSAH have arrived and I commit them to support the attack on Chaban, which finally begins to make headway. 2nd SS Panzergrenadier appears to have decided to have a regimental BBQ in the village of Ingiz rather than attack Perekop. 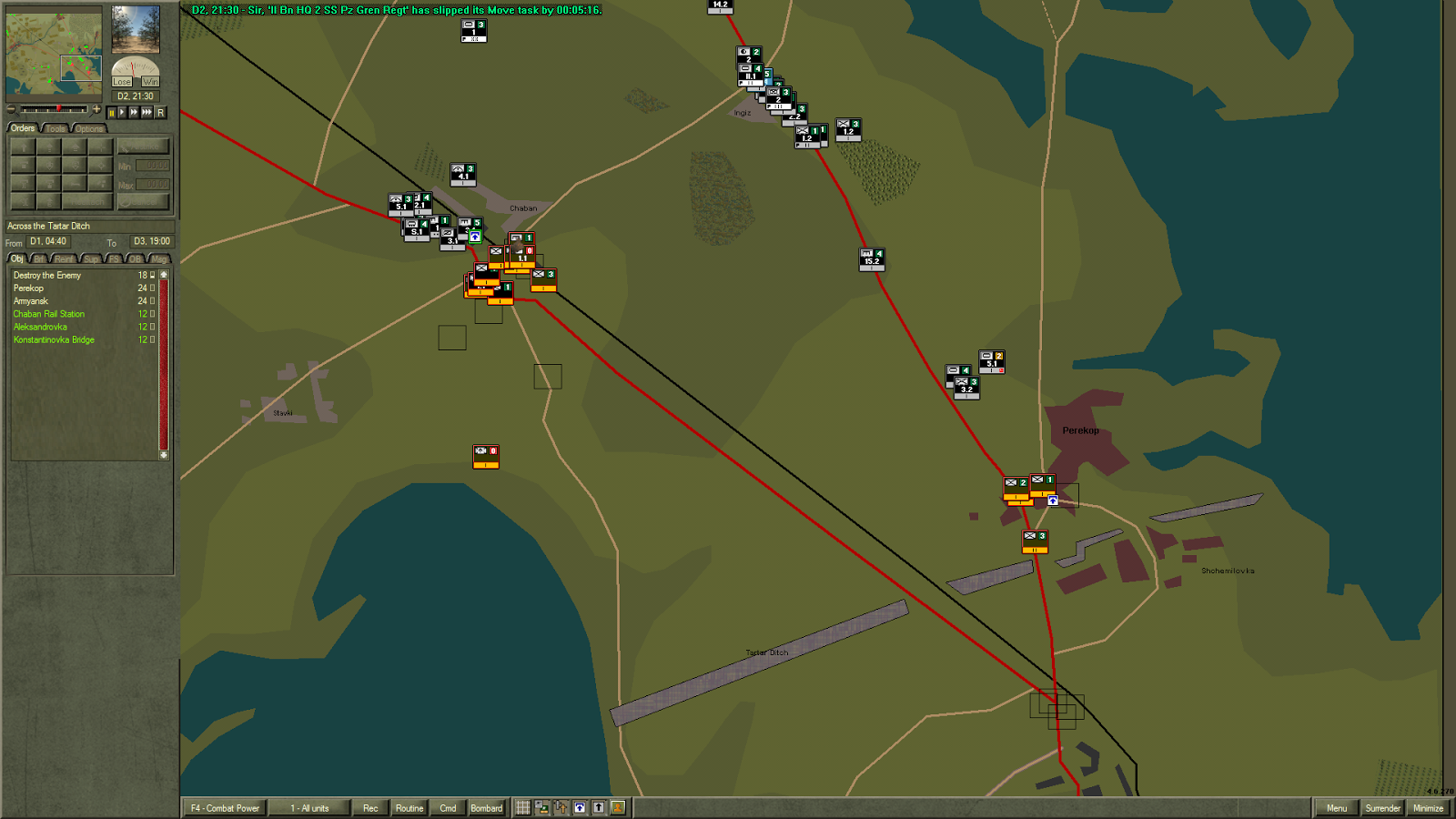 At 2130 D2 Chaban is taken and 2nd SS Panzergrenadier decides to get moving toward Perekop. I've directed II/2 SS to leave 45th Infantry to hold the bridge and left flank and move south toward Perekop. 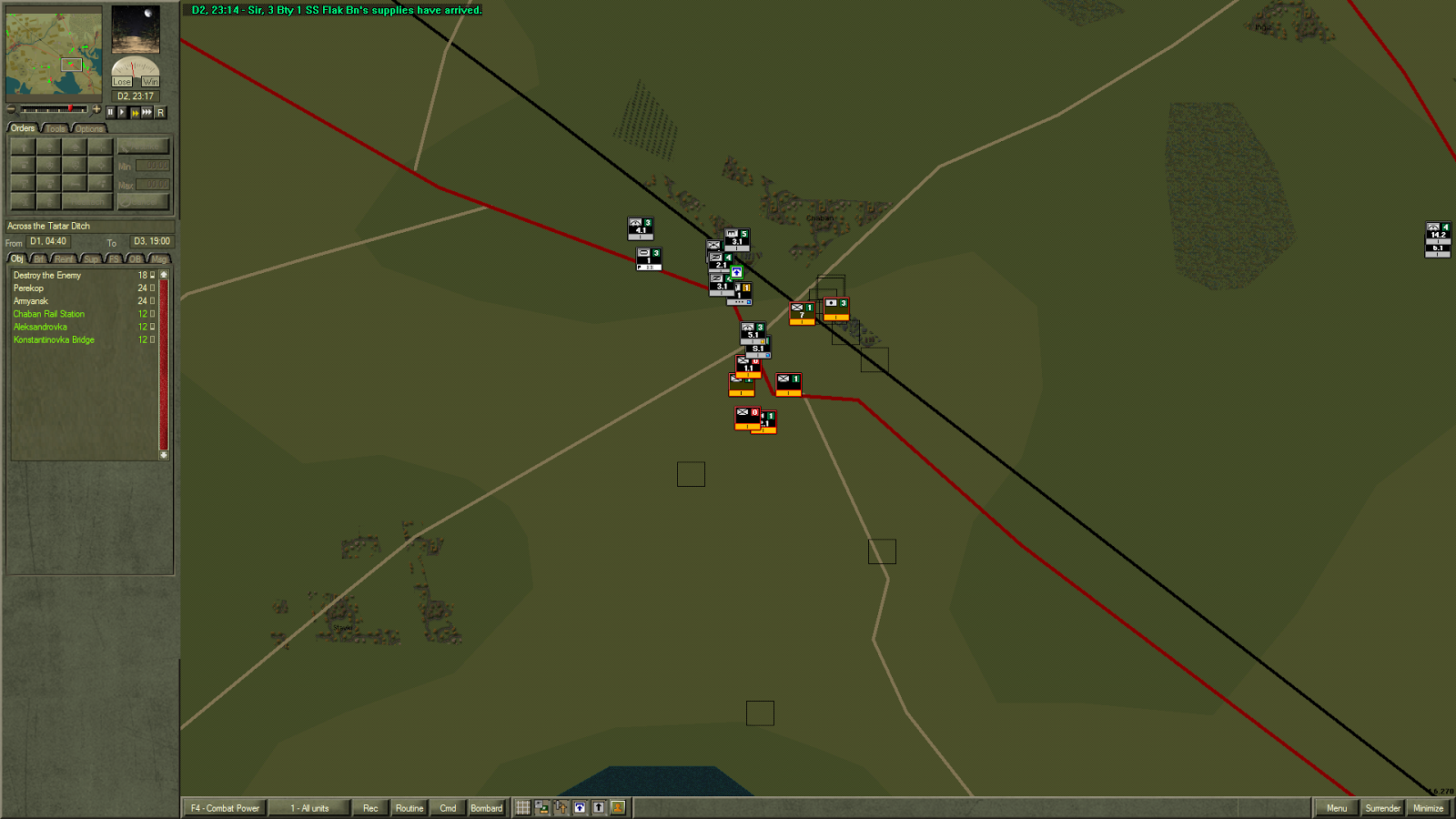 Night fighting south of Chaban. I want that road clear so I can bypass Perekop to the west. 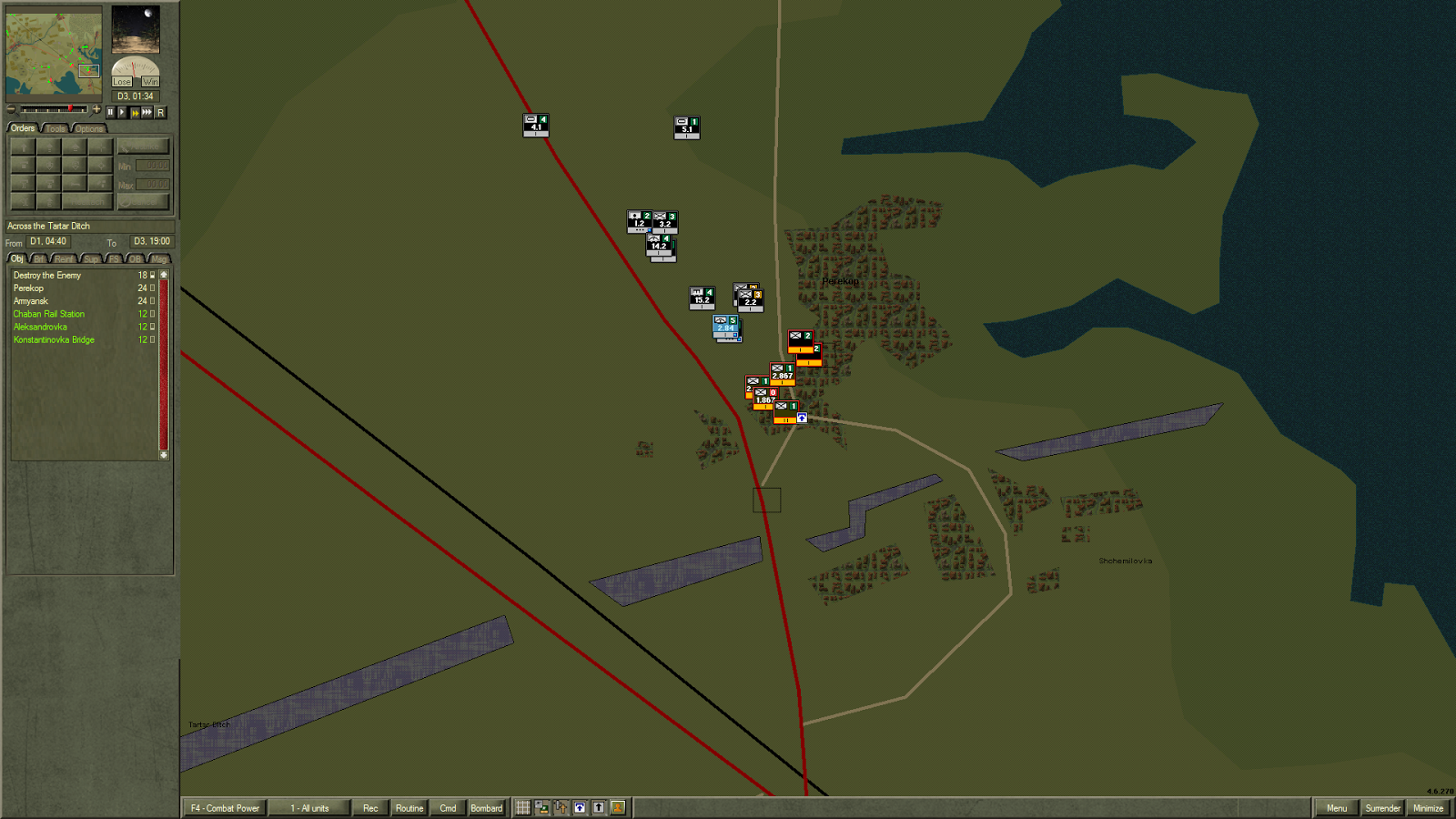 2nd SS Panzer launches a series of night attacks on Perekop. The fighting to secure the approaches to the Tartar Ditch will rage all night and into the morning. 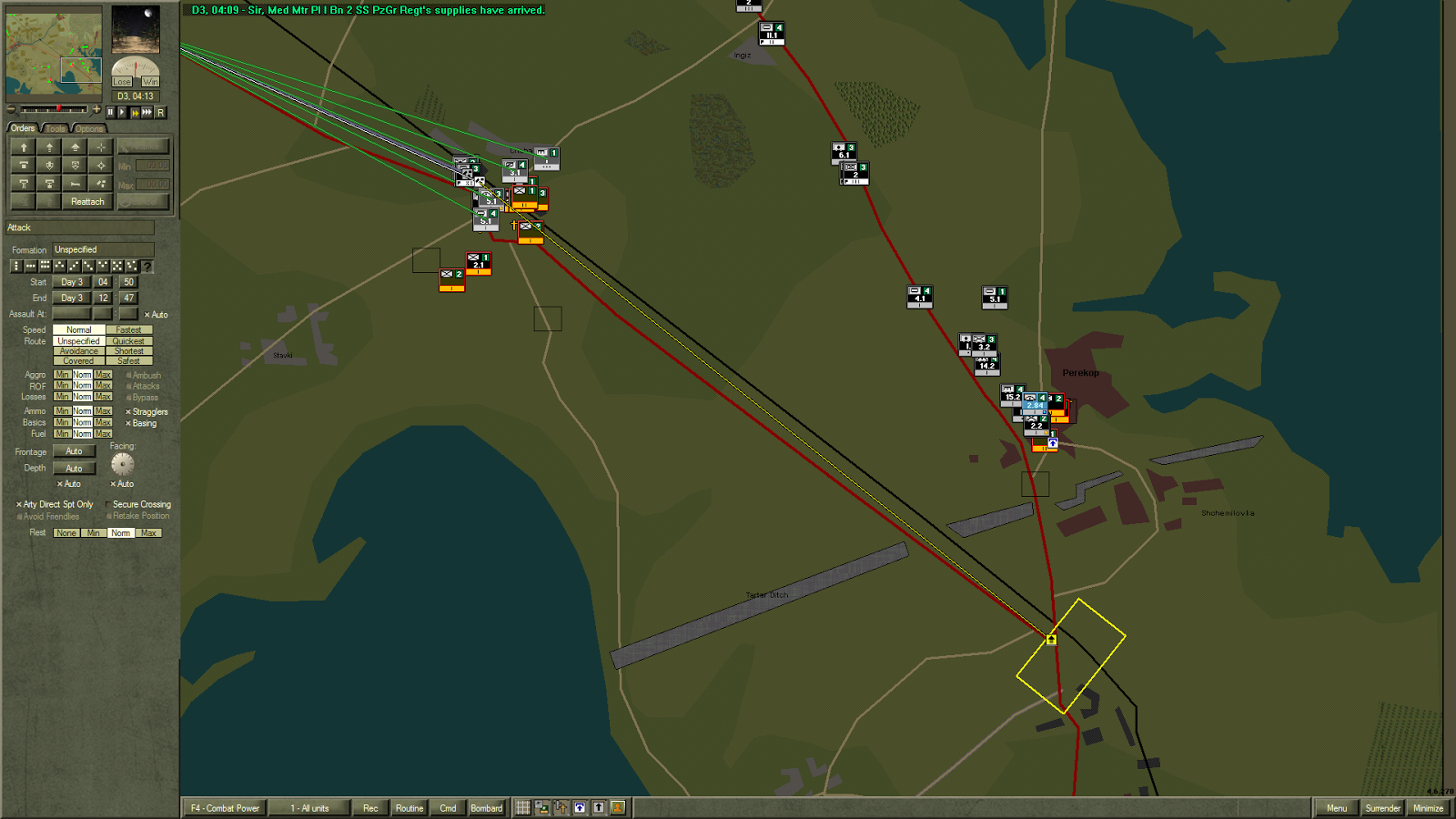 Planning the D3 morning attacks. I want 1st SS Panzer Aufklarungs Battalion to push down the main road west of Perekop to cut off the defenders and seize the road junction north of Armyansk. That should allow the fresh II/2 SS Panzergrenadier a clear run on the defenders at Armyansk. 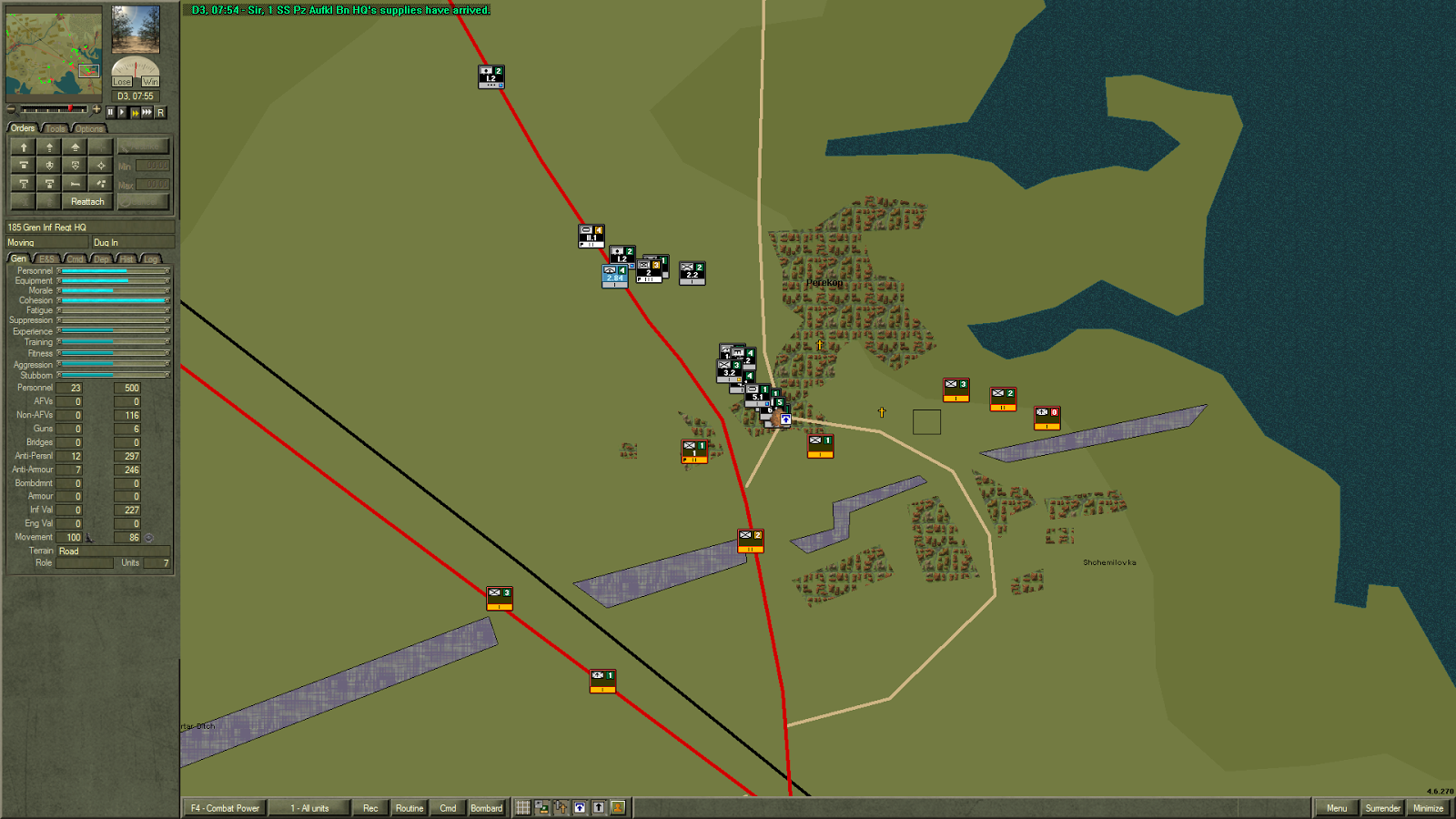 When I planned the attack of 2nd SS Panzer on Perekop, I set the form up point too far north. As a result, the Perekop assault doesn't have the artillery support it needs for a quick victory. I take Perekop around 0900 D3. The reconnaissance battalion is still organizing for the attack down the road. II/2 PzG is in position north of Perekop for the final drive on Armyansk. 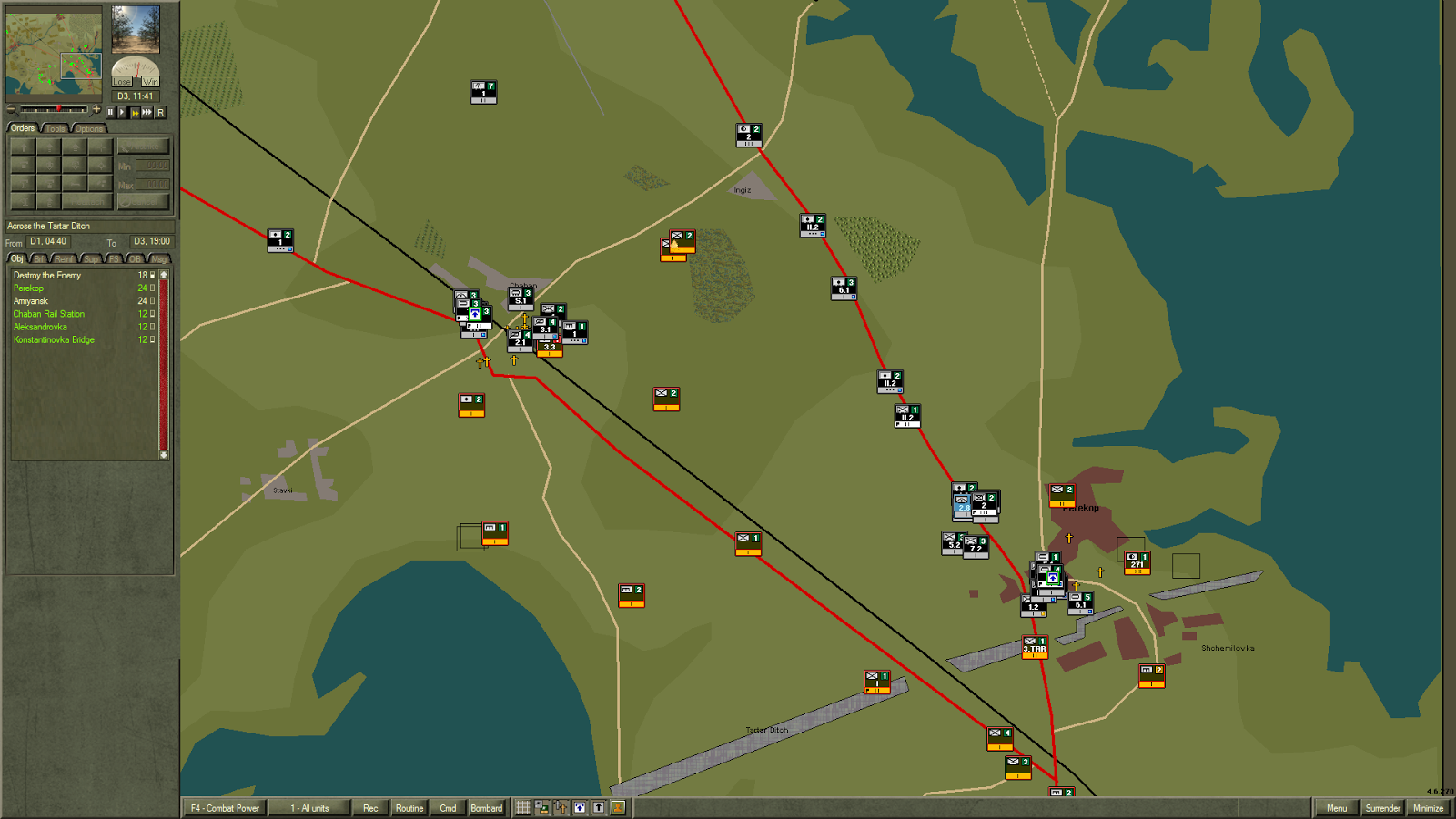 Three hours later and I've made little progress. Despite taking heavy casualties, the Soviets are organizing effective counterattacks. Even if all of these are beaten off with minimal loss to my forces, they're slowing down my advance. 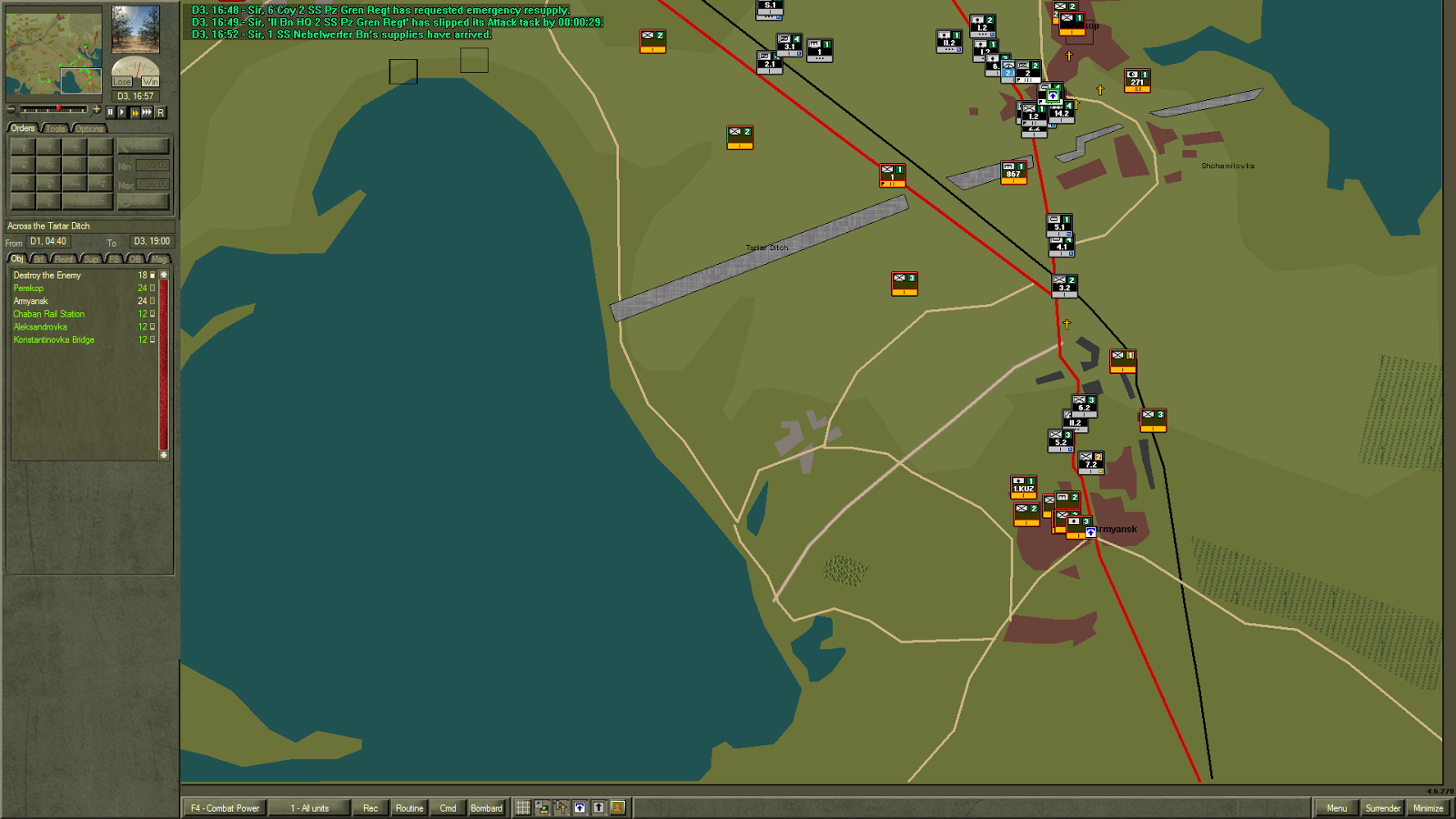 It isn't until later afternoon on D3 that II/2 Pzg supported by II/1 Panzer reach the outskirts of Armyansk. 1st Panzer Aufk hasn't yet reached the Ditch, let alone penetrated far enough south of Perekop to seize the crossroads. Time is very short, and I don't believe I have the combat power concentrated to take Armyansk in the time remaining. 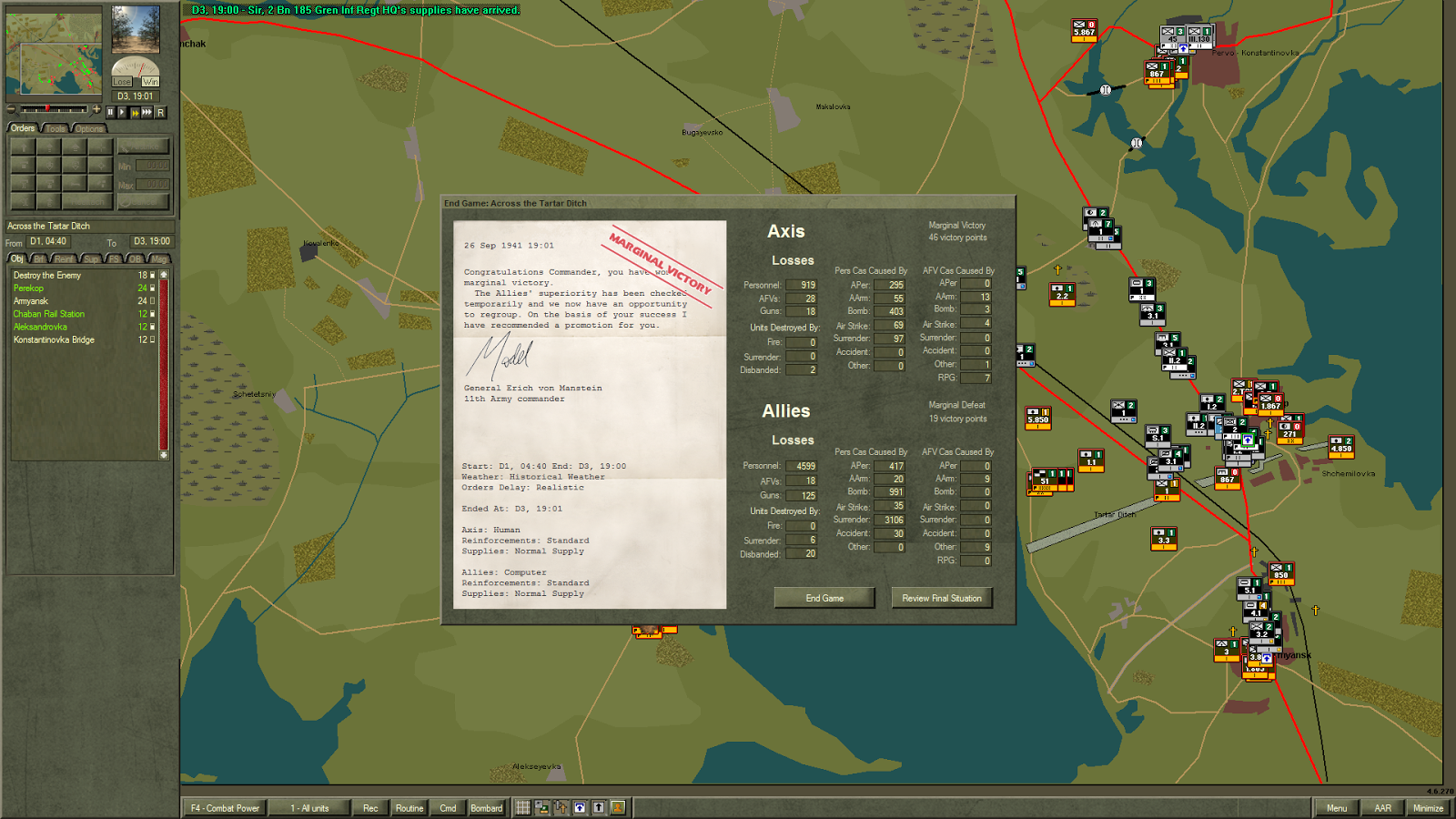 I've taken every objective but Armyansk and wreaked a fearful toll on the Soviets for comparatively light casualties on my part. I've projected sufficient force south of Perekop to deny the Soviets control of Armyansk. All told, this is enough for a marginal victory. A late Soviet counterattack was enough to cause control of the Konstantinovka Bridge to become disputed. Maintaining control of this objective would not have been enough to win the Decisive Victory, however.

I didn't win the decisive victory I thought I was on track for when Chaban fell on D2. Mostly this was due to poorly coordinated attacks with insufficient artillery. The 1941 Soviet formations in this scenario seem particularly vulnerable to massed artillery fire. Using your artillery well can spell the difference between quickly overrunning and objective (Aleksandrovka) or struggling to take it for hours (Chaban, Perekop). After having played this a half dozen times or more, I can also say that moving boldly on Perekop and Armyansk as early as possible on D2 can win you the battle, as long as you don't neglect the other objectives at least to the point of denying the Soviets control of them.

Across the Tartar Ditch is very much a battle of maneuver. Keep moving, throw lots of iron, and don't get bogged down!
Posted by Doug Miller at 11:33 PM