This is the second post in a series about this CMSF mission, part of the British campaign.  The first post can be found here.

This is a surprise nighttime assault, so I intend to move fast and attempt to overrun positions that have been disordered by tac air strikes.  My hope is that shock and fire superiority will keep the Syrian garrison off-balance enough to keep casualties low.  There simply isn't the time for a cautious advance.

On the right, 6 Platoon B Company is beginning their attack on the Airfield HQ.  In the center, 4 Platoon B Company, supported by the Pioneers, Recee, and Anti-Tank sections of C Company 4 SCOTS are positioned just behind where they might come under fire from the HQ.  I consider this and the buildings occupied by 6 Platoon to be the phase line marking the point of departure for B Company's assaults.  When 6 Platoon attacks the HQ, 4 Platoon will advance to the wall north of the Control Tower, under the cover of smoke dropped by the organic company mortars to their right. This is to screen 4 Platoon's advance from any fire from the HQ. 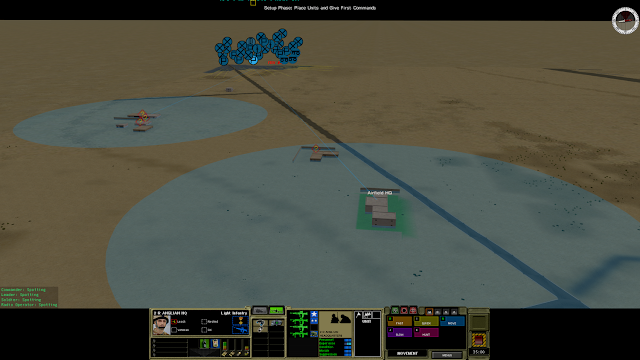 An overview of my initial movement plan and air strikes.   The closest cluster of buildings appeared to be something of a barracks during the earlier recon, and needs to be suppressed to avoid having any troops there slow the advance. 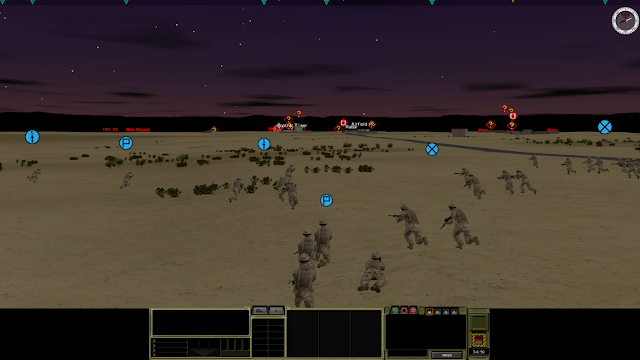 The battalion task force commander's view, as B Company begins to sweep forward toward their objectives.  The clock is running.  Already, we can see some BTR-60 APCs up ahead. 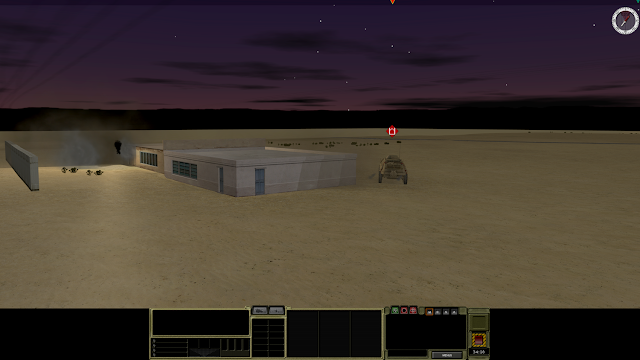 An AH-64 strike.  At least two BTR-60s were sheltering behind those buildings.  One of them is out of action.  That can't have been good for any infantry in the area, either. 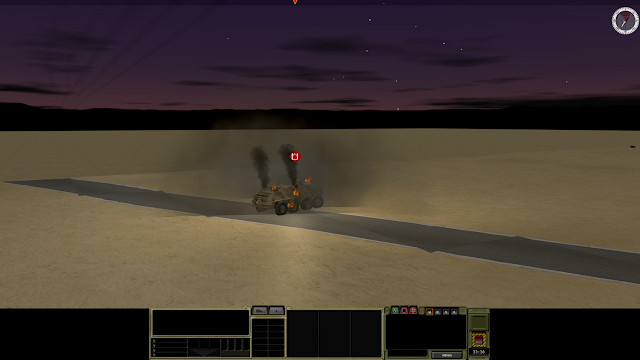 The AH-64 comes around for another pass, killing the advancing APC with a Hellfire. 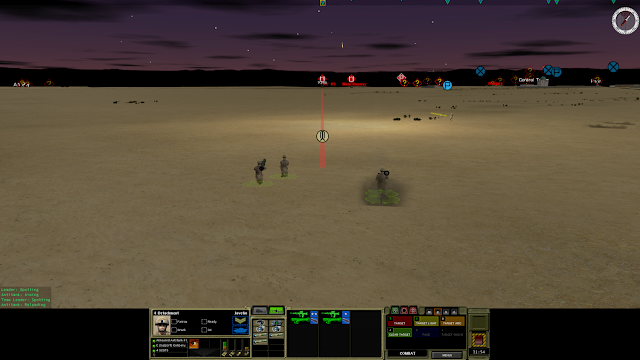 A couple of minutes later as B Company pushes forward and A Company sweeps towards it's jump off point to assault the AA batteries, a pair of Syrian BTR-60's begin to advance down the main runway.  A Company's Fire Support section begins to take fire - vehicles are hard to hide!


The Javelin team of 4 Section rushes to the left flank of B Company's advance, and fires a missile... 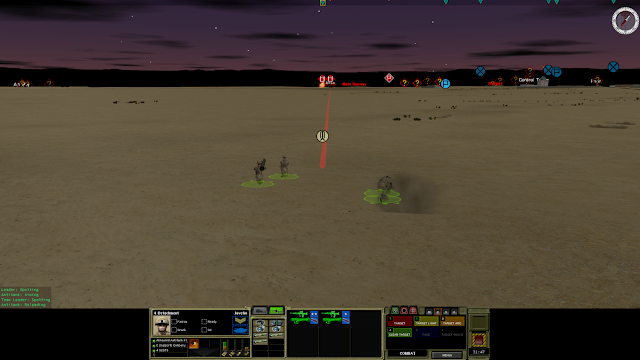 ...and, just three minutes into the attack, a third BTR-60 dies. 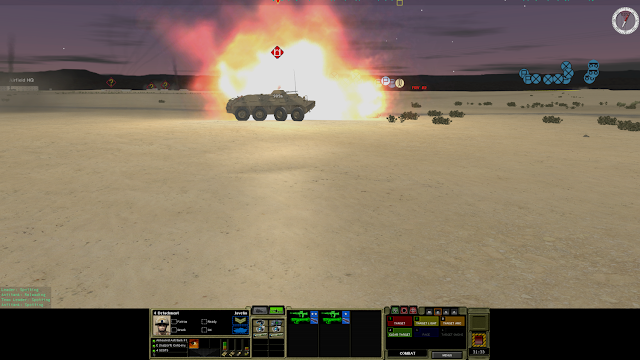 The second BTR fares no better.  Meanwhile A Company,led by the Fire Support Section, move to a sand berm flanking the runway.  This will be the assembly point for the company to begin their advance up the trench or wadi that leads nearly to the AA batteries. 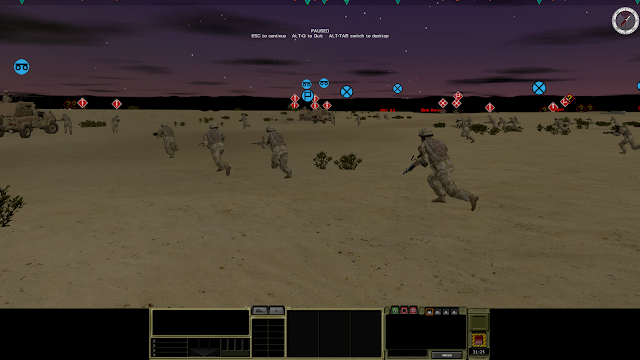 A Company nearly in position.  The Fire Support vehicles are firing on the survivors that bailed out of the BTRs.  This turns out to be the remnants of a platoon of C Company of the Airfield Defense Battalion and the C Company HQ staff. 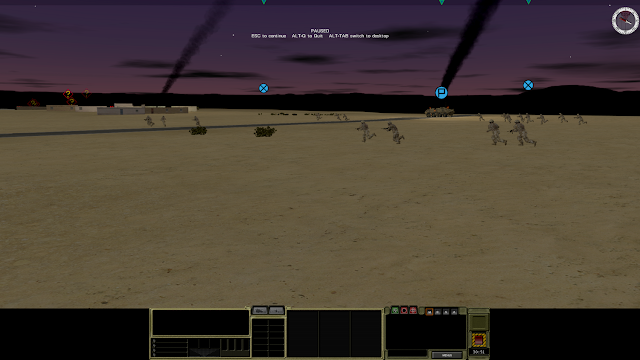 Five minutes into the assault.  6 Platoon of B Company is crossing the traverse road I'm considering the phase line for an attack on the first group of buildings on that side of the battlespace.  Their advance is lit by the flames of burning Syrian armor. 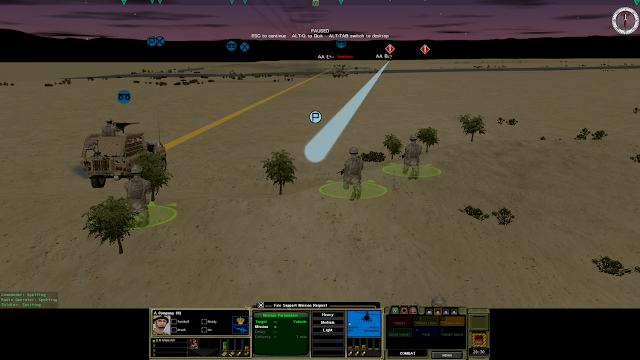 A Company HQ calls in an airstrike on one of the bunkers that overlooks the company's avenue of advance. The wadi the company will use for cover is located between the two walls seen in the distance. 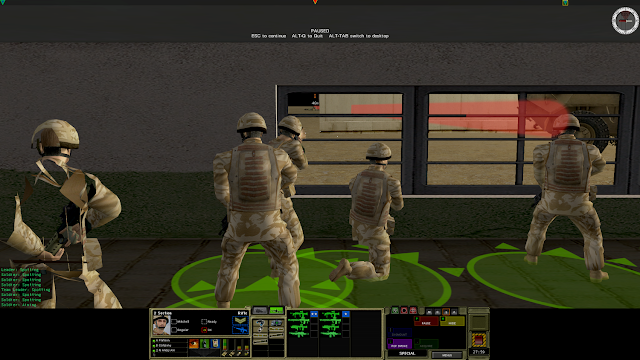 2 Section of 6 Platoon enters the barracks buildings.  After the airstrike it looks like the Syrians have fled, but 2 Section catches a platoon command group and opens fire.  As you can see by the orange exclamation above the Syrian squad, they quickly broke. 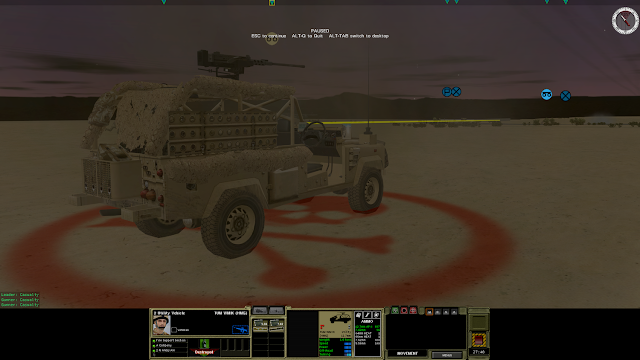 My first casualties.  This fire support vehicle had taken some wheel damage from BTR fire, and was slow crossing the runway.  I should have had the crew bail out when I saw the vehicle having trouble.  It was caught in the open by HMG fire from one of the Syrian bunkers, and all of the crew were wounded. 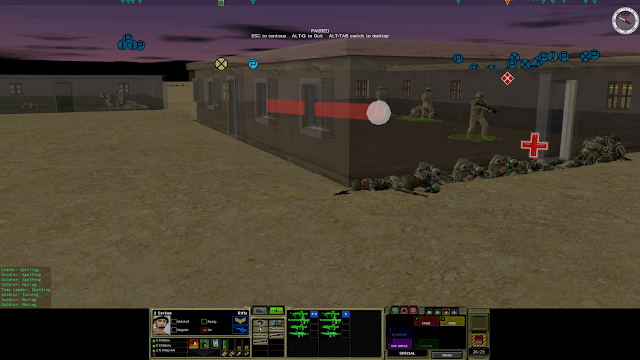 2 Section 6 Platoon continues their assault on the barracks.  On entering the second building they find another enemy squad cowering from the air strike.  It does not go well for the Syrian squad.  It also turns out that the initial AH-64 pass killed two BTR-60s, not just the one that could be seen burning.  Within the first five minutes or so of the assault the helicopters and Javelins took out five APCs. 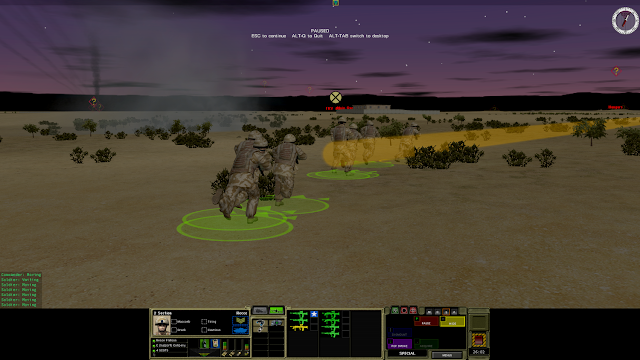 Almost nine minutes into the assault.  The reccee squad of C Company 4 SCOTS comes under mortar fire.  I'm going to speed up the advance of 4 Company and C Company toward the control tower to get them through the beaten zone as quickly as possible. 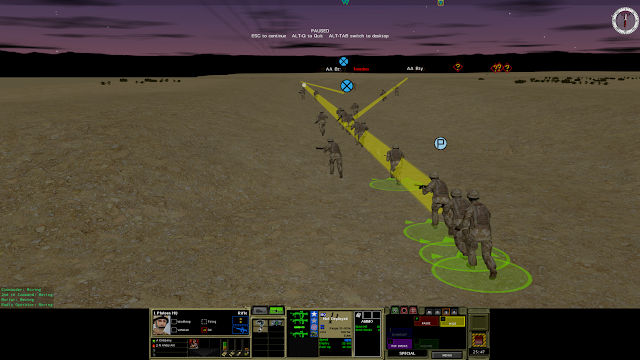 Ten minutes in.  1 Platoon A Company advances up the wadi.  The airstrike has not yet arrived to hit the HMG bunker, but it is under fire by the remaining vehicles of the Fire Support section. 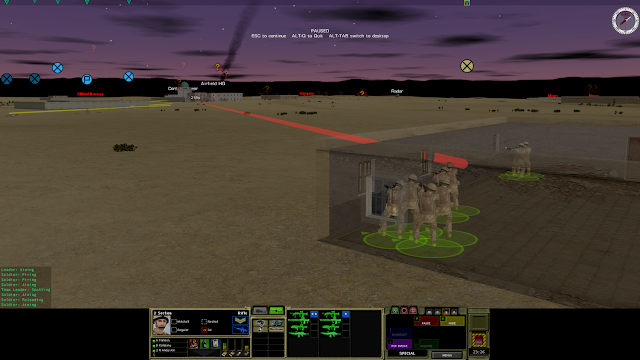 At around 12 minutes in, 2 Section 6 Company begins suppressing fire on the Airfield HQ building.  The initial AH-64 strike killed some sort of vehicle on the other side of the building, but no one is yet in position to see what it was.
2 Section is the least experienced of the units in 6 Platoon.  I'm going to hold them back to provide supporting fire while the other, more experienced sections conduct the assault.

The AH-64s have also hit the cluster of buildings toward the upper right of this picture, in case they house enemy troops. There's no indication the attack had any effect. 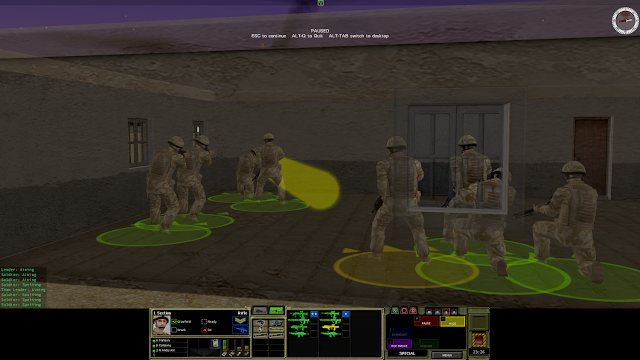 1 Section, 6 Platoon, B Company is a crack unit.  They've taken up positions in this building as the departure point for their assault on the Airfield HQ. 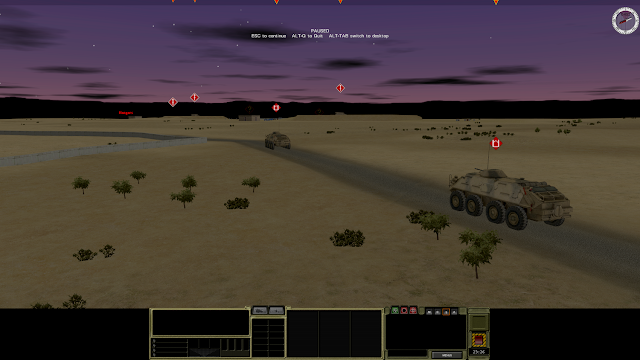 Now that we've advanced we can see yet another pair of BTR-60s in the vicinity of the radar building.  Clearly our intel was faulty - there are more than six BTR-60s on the prowl. 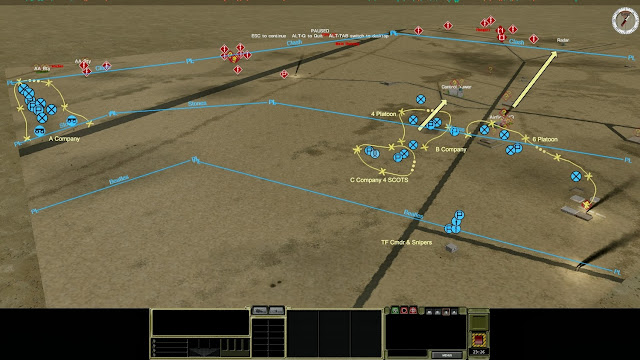 An overview of the battlespace at around twelve minutes into the assault.

The Armored Pioneers of C Company will blast a hole in the wall and lay smoke.  4 Platoon will then assault the Control Tower.

To the left, A Company has nearly completed their advance up the wadi.  I really should have sent 4 Section and their Javelins with A Company to take out the bunkers - waiting on AH-64 attacks is going to take too long, I'm afraid.  A Company will shortly call another helicopter strike on the other bunker overlooking their assault path, and then quickly call two more strikes on the AA batteries themselves.  When the first bunker has been taken out I'll begin to advance A Company, trying to time their advance to take advantage of the series of gunship attacks.  At this point they have almost 24 minutes to sieze their objectives, so I'm not as concerned about A Company's schedule being delayed by waiting on air strikes as I am not having tac air to support 6 Platoon's advance toward the radar building objective.
Posted by Doug Miller at 12:00 AM