Last weekend my children and my wife, and my son's fiancé indulged me with another multiplayer game of Pub Battles from Command Post Games. This time we took on the newest in their line up: Antietam/Sharpsburg. 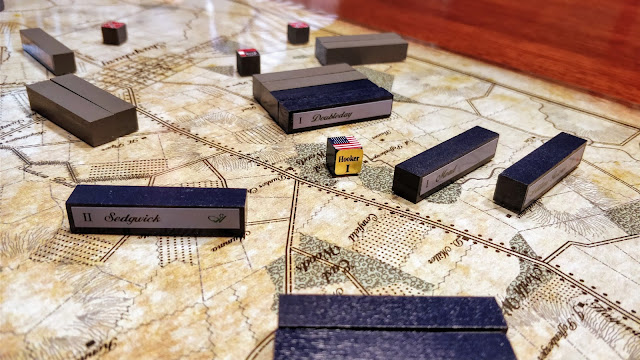 I was a Kickstarter backer and have the enhanced Sharpsburg version. This included some unique stickers for the blocks and a set up appropriately labeled measuring sticks, some cloth bags for the blocks and a burned-edge parchment Terrain Effects Chart/Rules Sheet. Tip for Command Post Games - you can probably skip that last extra in the next Kickstarter! 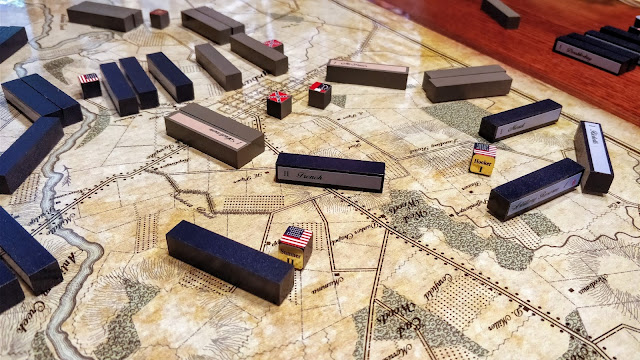 The rules and system for Antietam/Sharpsburg are essentially the same as those for their prior games. If you've played Brandywine or Marengo you already know how to play this game. 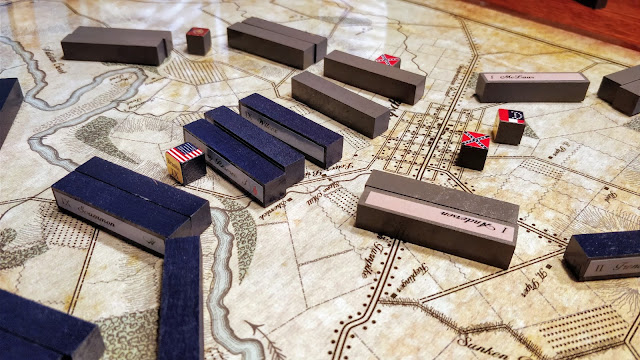 As usual, component quality is great and the map is just incredible. I cut my wargaming teeth on American Civil War games and for a long time the ACW was my period of interest. Seeing the familiar names on the blocks and the map was like a homecoming. I'm looking forward to playing more of this game and the upcoming Gettysburg.

As a multiplayer game, things went a lot more smoothly this time than they did with the Brandywine game we played a few weeks ago.  For one, we allowed both sides to do some group planning before Turn 1 - this is a difference in the multiplayer rules between the two games and it makes sense. If we try Brandywine again we'll allow it there, too. Doing so allowed both sides to have a master plan for the battle worked out ahead of time that the various commanders could follow in the absence of any other orders. Orders at the beginning of each turn were then more to communicate refinements to the plan, rather than attempts to create a plan on the fly. 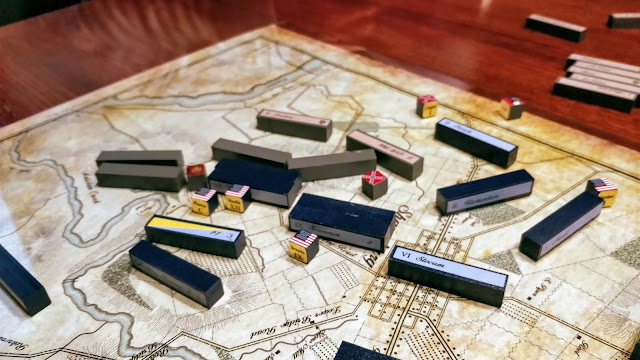 The ANV set up too far to the south and were too crowded in their deployment. Worse, they didn't really position themselves to block the bridges across the creek. Next time we play I need to be sure to put my son, who has a better grasp of tactics than the rest of the family, on the opposing side from me!

In any case, the ANV held their own until late in the day. The green troops of the AOTP had a tough time causing casualties. Concentrated artillery and sheer weight of numbers caused the ANV divisions to fall back repeatedly though, and their initial deployment mistake put them too close to the map edges. The Federals were able to force retreats that caused eliminations in the last two turns that pushed the ANV casualty total above 50%.


Antietam/Sharpsburg is similar to Marengo in that one side has a smaller but better army, opposed by a larger but poor quality army with artillery superiority. Playing the side with the smaller army requires some finesse and skill. If I were to play this again I would command the CSA and give the USA to my son, and I think we'd have a more even fight. As it was, the Federals knocked out a major victory.

I enjoyed this game every bit as much as I've enjoyed the other games in this series. As I mentioned to someone the other day, while the games are a bit more expensive than your average GMT game (but really no more than other publishers that strive for high component quality) they are extremely replayable. The easy rules and attractive components make it easy for me to get non-wargamers as well as old hands to play a game.